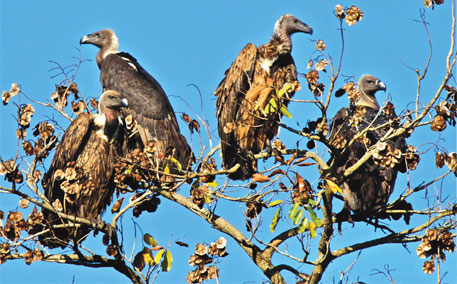 THE population of vultures are recovering, albeit slowly, from the blows of a drug that had nearly wiped them off in the 1990s. A study published in PloS One has found that the populations of three species of Gyps vultures found across India and Nepal have stabilised.

The decline in the populations of long-billed, slender-billed and white-billed vultures was blamed on a pain-relieving drug, diclofenac, used to treat cattle. The drug poisoned vultures that fed on the cattle carcasses. The government banned its use in cattle in 2006. Nepal followed the suit. “The species were declining at 40 per cent a year for over a decade,” says Richard Cuthbert, scientist at Royal Society for the Protection of Birds (RSPB) in the UK and one of the authors of the study. “It is a good news that their populations have stabilised following the ban on diclofenac. In fact, it looks like their numbers are beginning to increase, though it is still a little early to say that.”

The study was jointly conducted by RSPB, Bombay Natural History Society (BNHS), Bird Conservation Nepal and University of Cambridge. Scientists drove across the western, central and eastern states of India and low-land regions of Nepal to monitor vulture numbers. Lead author of the study, Vibhu Prakash of BNHS, says despite the stabilisation in population, only a small number of the birds are left, which makes them extremely vulnerable.There were about 40 million vultures in the 1980s. Our estimate in 2007-08 showed less than 60,000 vultures were left in the country. They are restricted to certain pockets, including Bandhavgarh National park, areas around Ahmedabad and Damdama near Dibrugarh.

Anil Kumar Chhangani, behavioural ecologist with Maharaja Ganga Singh University, Bikaner, and member of IUCN, says there could be more vultures than the study has sighted.“Observing vultures from the comforts of your vehicle never gives a good figure. You have to go right into their habitats,” he says.

Regional surveys corroborate this. A survey by forest officials and non-profit Prakruti Nature Club in Gujarat shows vulture population in Junagarh has almost doubled. In 2010, 69 long-billed vultures and 26 nests were spotted in the region. Last year, the surveyors found 131 vultures and 85 nests. Conservationist Satya Prakash says vulture numbers in Hazaribagh have remained stable at 250-300 for five years.

Yet conservationists are wary

Last year, a study by BNHS found that the ban on diclofenac is not being implemented properly. The team, which also included RSPB scientists, found that 36 per cent pharmacies in the country were selling diclofenac unabashedly, even five years after the ban.

Then there are other painkillers, such as ketoprofen and aceclofenace, used to treat cattle, which are equally poisonous for vultures as they get metabolised into diclofenac. “They are yet to be banned, and if they are widely used, their impact will be very bad for the remaining small population of vultures,” says Cuthbert.

BNHS plans to take up the matter with the Indian Veterinary Research Institute. Its scientists are also in talks with the government to devise a mechanism to screen all vet drugs for vulture-safety tests before they are rolled out into the market.

However, just eliminating the drugs may not be sufficient to recover the small population. Vibhu Prakash is thus coordinating a nationwide breeding programme for vultures. It has three breedings centers in Pinjore (Haryana), Jalpaiguri (West Bengal) and Guwahati, which will release about 100 pairs each, beginning 2016. Refuting claims that vultures do not breed well in captivity, Prakash says his breeding programme simulates the wild environment. “There is no interference from staff. The bird pair up and form nests like they would in the wild.” He complains that the Union Ministry of Environment and Forests offers very little help for vulture conservation. “Just running a breeding centre requires Rs 50 lakh a year. We have to depend on funds from agencies in the UK,” he adds.