More hospital beds are not the answer, say survivors of the Union Carbide gas disaster 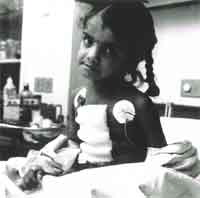 the medical fraternity of Bhopal is groping in the dark when it comes to the treatment of the 5,00,000-odd victims of the December 1984 gas tragedy. Without knowing the toxic chemicals involved and their impacts, they are like the fabled five blind men describing an elephant. The results: each victim has already consumed more than 10 kg of steroids as a part of symptomatic treatment since 1985; women continue to have miscarriages; and babies are born with genetic deformities.

The Bhopal Hospital Trust ( bht ) - financed by the Union Carbide Corporation ( ucc ) following directions by the Supreme Court ( sc ) - has, ironically, added up hospital beds and a heart surgery unit to its upcoming hospital.More than 13 years after methyl isocynate gas leaked from the ucc plant on December 3-4 midnight, about 4,000 people still visit hospitals everyday. But hospitalisation and cardiac treatment is far from their health needs.

Victims' organisations are fighting another battle for "justice in the form of real treatment". Still, nobody knows exactly what treatment to be given to the gas-affected people, and the increase in the number of beds does not help much, points out Abdul Jabbar, president of the Bhopal Gas Peedit Mahila Udyog Sanghatan ( bgpmus ). Now, the focus of their battle is the ucc-financed bht , located 11 km from Bhopal. "It is another strategy of the ucc to wash its hands off the tragedy," Jabbar points out. He criticises both the state and the Union government for helping the company responsible for the greatest industrial accident ever.

The government's policy regarding medical facilities to the survivors has been to provide more hospital beds than real treatment. In addition to the hospitals with a total of 275 beds, five hospitals with a total of 740 beds have been built for the victims. The sc , in its final order on October 3, 1991, had directed ucc to finance a fully equipped 500-bed hospital for the survivors of disaster. The ucc set up the bht on February 20, 1992, with a part of the proceeds from the sale of its shares. The sole trustee of this hospital is Ian Percival, an attorney at law with Sidley and Austin, one of the four us-based firms retained by the ucc.

In December 1993, Percival petitioned the sc for permission to sell ucc's shares that had earlier been attached. After meetings between Percival and Indian officials in January 1994, the Indian government stated in court that it agreed with the petition. The trust paid Rs 60 crore ( us $20 million) towards building the hospital. Percival was assigned to oversee the setting up of the hospital and was paid us $2 million for office expenses of the trust.

"I do not understand how this can be looked as an extension of the ucc. It is entirely independent of the ucc ," said Percival in reply to a questionnaire sent by Down To Earth. "One of the principal objects of this hospital - and for which it will be equipped - is to research into the toxic impact of the gas. It will have a better chance of discovering the impact than has been available to anyone else so far." According to him, highly qualified staff will be provided with the most sophisticated equipment and will have the best possible chance of diagnosing what is wrong with a patient and providing effective treatment. But he resents the non-cooperation of the people. For this very reason, the bht has hired a renowned public relations firm in Delhi to build up its "image" this year.

In a letter to the Parliamentary committee on the Bhopal gas disaster on September 8, 1997, survivors' and victims' organisations, including the bgpmus wrote: "A recent issue of major concern is the proposed handing over of the health infrastructure set up the government to the so called Bhopal Hospital Trust set up by Union Carbide. This is most likely to further the public relations interests of Union Carbide than provide medical care to the ailing survivors."