The selenium scourge in Punjab

Two districts of Punjab -- Hoshiarpur and Nawanshahar -- have been hit by a rash of ailments. The inhabitants are experiencing hair loss, joint swelling, certain types of deformities and other health problems. Their crop and cattle, too, are affected. At the root of the trouble is selenium, a non-metallic element of the sulphur group... 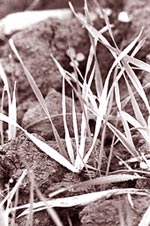 Two districts of Punjab -- Hoshiarpur and Nawanshahar -- have been hit by a rash of ailments. The inhabitants are experiencing hair loss, joint swelling, certain types of deformities and other health problems. Their crop and cattle, too, are affected. At the root of the trouble is selenium, a non-metallic element of the sulphur group. The trace mineral is proving toxic to health as well as the environment owing to its excessive occurrence in the area. What is worse, the magnitude of the problem may be much greater.

"Eight villages are known to be affected in the two districts. But we have identified eight new sites in the Shivalik mountain range where high levels of selenium are found," reveals K S Dhillon, professor, department of soils, Punjab Agriculture University (pau), Ludhiana. He also mentions parts of Haryana such as Karnal. Local people indicate that the problem is spreading rapidly within the danger zone itself. "Initially only 8 hectares (ha) of land was affected. This has gone up to 50 ha," says 64-year-old Narinder Singh Sanga of Simbli village in Hoshiarpur.

Whereas the pau had diagnosed the problem in the early 1980s, the state administration has begun taking remedial measures only recently. Even now it seems to be a case of 'too little, too late'.
According to state records, three villages in Hoshiarpur and five in Nawanshahar are reeling under selenium poisoning. K S Bhullar, deputy commissioner, Hoshiarpur, says that high amounts of the element have been detected in 80 ha of agricultural land in Hoshiarpur. "In Simbli village, out of the 541 ha of agricultural land, 40 ha is affected. The figures for Nazarpur and Panam villages are 25 ha out of 103 ha, and 15 ha out of 628 ha, respectively," adds Bhullar.

Nawanshahar's additional deputy commissioner, Vikas Garg, says that about 40 ha of agricultural land in the district is impacted. These tracts are spread across five villages -- Barwa, Mehandpur, Jainpur, Rakhardhal and Panj Manjra. In the same breath, he tries to play down the matter. "We got water samples from 29 locations tested at the pau in November 2003. Only two places -- Jainpur and Mehandpur -- have recorded selenium levels above the permissible limit," claims Garg. Dhillon, however, points out that more new areas are being discovered.
To date, experts have been unable to pinpoint the exact reason for the strange phenomenon. Neither have they come up with conclusive evidence to show why the problem is peculiar to certain pockets of Punjab. At the same time, scientists have put forward some explanations that seem plausible.

"All the affected villages lie in the foothills of the Shivalik range. Our hypothesis is that for the past several years, selenium has been transported through floodwaters from the Shivalik mountain to these areas. We have traced the paths of seasonal rivulets in the region, which originate in the hills and end in the vicinity of the villages. This lends credence to our theory," stresses Dhillon. Meanwhile, the search for more answers continues.

One of the factors that seem to have aggravated the problem is the cropping pattern of the region. Significantly, though crops such as maize, sorghum and oat are safe, certain others are known to attract high amounts of selenium. Dhillon observes that over the past 8-10 years, areas which have switched from the maize-wheat pattern to that of rice and wheat are the worst-hit.


Results of recent tests show that the problem has assumed alarming proportions. Selenium levels in the affected area's groundwater have been found to be as high as 0.07 parts per million (ppm). It may be noted that the Bureau of Indian Standards prescribes a limit of 0.01 ppm of selenium in drinking water.

For soil, the safe limit arrived at by pau is 0.5 ppm. Any amount above this would lead to plants containing more than 5 ppm of the element. "When selenium levels in a plant go beyond 5 ppm, it becomes toxic for consumption," says Dhillon. "If the amounts are in excess of 100 ppm, white patches start to appear on the plants (the condition is described as snow-white chlorosis). Such spots are common in crops grown in these villages. Therefore, one can well imagine the amount of selenium the local people are consuming," he adds.

Expectedly, the two districts are pockmarked by telltale signs of the damage that selenium has caused. Sewa Singh, a 50-year-old farmer of Simbli, returned to his village about five years ago. "Within a few months, I turned bald and my nails got deformed. It is only after I stopped eating selenium-rich food that my hair started to grow again." The result is that though Sewa Singh sells the crop grown in his fields at the local mart, he does not keep it for personal consumption.

Sheetal Singh, another farmer of the area, lost all his hair. He started to experience pain in his joints as well. In desperation, he has begun cultivating crops meant for his own use on a separate piece of land. He, however, continues to sell the regular selenium-rich crop at the local mart from where it is despatched to other parts of the country.

Apart from impairing human health, selenium has wrought havoc on the villages' produce and cattle. "Plants do not mature properly and the yield has fallen by 25-30 per cent," complains Bagga Singh of Simbli. "My cattle have lost their horns. One buffalo has gone blind and another sterile. Milk production, too, has fallen," says Sewa Singh.


The Punjab government's response has been highly inadequate. Yogesh Chander Markan, civil surgeon, Hoshiarpur, discloses: "After conducting a survey in three villages, we found that 362 out of 3,958 people showed symptoms of selenium poisoning. We organised an awareness campaign."

The measures taken by the authorities are also reflective of their non-serious attitude. One of these pertains to the distribution of vitamin b tablets among villagers. In another such step, farmers have been asked to apply one tonne of gypsum per hectare every alternate year. "This will slow the selenium absorption by crops by up to 70 per cent," says H S Bhatti, chief agriculture officer, Hoshiarpur. But the farmers' demand for subsidised gypsum has yet to be met.

Confusion prevails in both the districts over whether to use tubewells or the lift irrigation system. "The best way out is to opt for lift irrigation and bring canal water," says Bhatti. But Bhullar claims that lift irrigation is not practical and that money has already been sanctioned for deep tubewells in Hoshiarpur. The plan envisages the state government making a one-time investment of up to Rs 4 lakh per tubewell. For his part, Nawanshahar's deputy commissioner, H I S Garewal, reveals that Rs 1.16 crore has been sanctioned to install 29 deep tubewells in the district. Garg, however, contends that not more than three to four tubewells are required.

Ironically, the villagers have not been consulted in the planning process. All the same, they have made it clear that they will settle for nothing less than alternate tracts of land and monetary compensation.

Dhillon, who is working on a project to mitigate the impact of selenium poisoning, concurs with the farmers: "The affected people should be given fresh land. The tracts with high selenium deposits should be fenced and used for social forestry purposes. These can prove to be effective long-term measures." He has intimated the state government about the steps. But has the message seeped in?