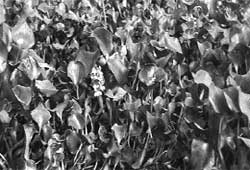 water hyacinths (Eichhornia crassipes) have never had it so good, and Lake Victoria in Africa has seldom had it so bad. The lake has been infested by the weed that has caused numerous problems to fisherfolk, tangling the fishing nets, clogging up the motors of the boats and destroying the fish breeding grounds. Uganda, Kenya and Tanzania, the three countries that border the lake, are urgently trying to find ways to deal with the problem. The weed has choked the filters of Uganda's main hydroelectric plant at Owen Falls (The Economist , Vol 346, No 8050).

The weed floated down the Kagera river in Rwanda and came to Lake Victoria some 10 years ago. The shallow, muddy shoreline in Uganda is ideal for the hyacinths. No wonder Uganda is the worst hit: over 80 per cent of its 300-km shoreline has been gorged up. Many experts in Uganda are of the opinion that the level of infestation is alarming.But action against the menace is conspicuous by its absence, one reason being the international scale of the problem. Although the World Bank has initiated a project called Lake Victoria Environmental Management Pro-gramme to deal with the hyacinth problem, it has largely been ineffective.

Methods to control the hyacinths have problems of their own. Manual removal method is not successful as the weeds come back to cleared areas. In 1997, 24 hectares (ha) of hyacinths were removed from the water near the Owen Falls electricity plant with a great deal of effort. About 10 ha of the surface was infested by the weed again.

Lifting the weeds out of the lake on conveyor belts and loading them on trucks to be transported is a cumbersome process and the machines are quite expensive. Another question mark is regarding the disposal of the removed plants.

Biological control is another method to deal with weeds. It involves the introduction of potential predators like moths, weevils and beetles. But this carries its own risks. Introduced predators can turn to nontargeted plants, becoming an ecological problem. Beetles were introduced in Florida to get rid of water hyacinths, but instead, they multiplied faster that the hyacinths. This resulted in widescale damage to gardens and lawns. Mycoherbicides are based on disease-causing agents. Such herbicidal measures, however, are not very popular as they pose the danger of the disease skipping species.

Chemical measures are deemed to be the most effective solution by governmental and private agencies. But the National Environmental Management Authority of Uganda published a report that shot down the proposal to use herbicides. It is feared that they would affect fisheries. This would bear on Uganda's fish exports. Besides, herbicides are quite expensive and require regular reapplication.