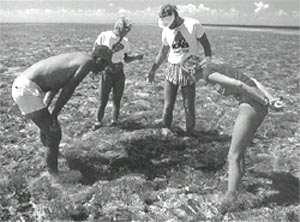 the surface of the ocean in the tropical Northern Hemisphere has been warming up dramatically at a rate of about 1Fahrenheit per decade since 1984. "That's alarming," said oceanographer Alan E Strong of the us National Oceanic and Atmospheric Administration ( noaa ). He also said this has contributed to the stress and bleaching seen in many coral reefs worldwide during the past 10 years. Strong and colleagues analysed sea surface temperature data taken by noaa 's polar-orbiting satellites from 1984 to 1996, with the exception of 1991-92, when airborne emissions from the eruption of Mount Pinatubo in the Philippines interfered with recordings.

On an average, temperatures rose about 0.1F per year in the waters nearest the equator, with a maximum at 5 degrees in the north latitude -- a region of the Earth that contains a large amount of coral, the scientists found. That warming rate is far higher than increases measured on adjacent land surfaces. The warming trend occurred over roughly the distance from Ecuador to southern Mexico, extending around the Earth north of the equator. There is no immediate explanation for it. "We're looking for things like global warming," Strong said. But the increase in average global temperature during the entire 20th century is about 1.1F. And it is by no means clear how an increase of less than 1 per cent per year in atmospheric greenhouse gases such as carbon dioxide could possibly cause enough extra warming to raise sea surface temperatures by 0.1F per year.

"Most likely, it reflects a combination of several different factors in a complex relationship which is not yet understood," said Gregory Withee, noaa assistant administrator for satellite and information services. The warming might be linked to the climate phenomenon known as the Pacific Decadal Oscillation, a long-term fluctuation in those ocean waters, Strong speculated. "Or it might be tied to some north-south variation we haven't discovered yet." Compounding the uncertainty is the observation that during the study period, the centres of many major ocean basins cooled. Only the water on the margins warmed. There is no consensus explanation for this phenomenon.

Two trends found in the satellite record, however, were generally expected by climate scientists: a slight overall cooling in the Southern Hemisphere (which produces far less greenhouse gas emissions than the population-dense Northern Hemisphere), and a clear warming pattern in northern oceans at latitudes above 50 degrees north. Unfortunately, oceanographers have no exactly comparable sea surface record for the period before 1984 to provide a benchmark for the new analysis. The satellites that produced the temperature record were launched in the early 1980s and did not start taking reliable data until 1984. They are still in service, but Armstrong's group did not include readings from 1997 and 1998 because the unusually intense El Nio and La Nia phenomena during that period would have skewed the average.

Some veteran climate scientists, who did not participate in the research, were unsure about the conclusions that can be drawn. For example, James J O'Brien of the meteorology department at Florida State University noted that traditionally "the biggest variation in sea surface temperatures tend to be in the tropical oceans, "but he added that a 1F warming would be "quite significant". Nonetheless, O'Brien said, "this is climate, and short pieces of the climate record can mislead you." A dozen years is "too short a period" to provide definitive evidence of a trend, he said. Damage to coral is often regarded as a portent of impending threats to other ecosystems, especially the fish that live nearby. A recent study conducted by the us state department concluded that high temperatures in 1998 had prompted the largest die-off of coral in modern times, and that similar events were "likely to be a consequence of a steadily rising baseline" of marine temperatures. "If the apparent trend persists another 10-15 years, a lot of reefs are going to be in trouble," Strong said.