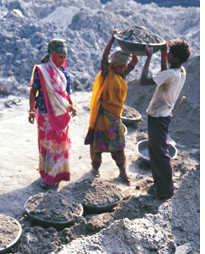 thermal power plants may have to bear transportation costs to dispose of flyash, says a draft notification of the Union ministry of environment and forests (moef). This has been done due to the rapid increase in the number of thermal power plants in the country. Industry, however, hasn't taken it well.

"Flyash disposal is a major issue. The rapidity with which new thermal power plants are coming up, and that too all high-capacity ones--1,000 mw or 2,000 mw-- it has become necessary to go ahead with a new and clear vision. There is no problem with smaller plants but disposal from bigger plants is a problem that needs to be sorted out," says R Anandakumar, adviser in moef.

Meanwhile, generation as well as use of flyash has increased.According to moef, between 1999-2000 and 2005-06, generation of flyash increased from 89 million tonnes to 112 million tonnes (MT) and utilisation increased from 13 mt to 51 mt. The increase in utilisation came after the flyash notification of 1999, which encouraged manufacturers and construction agencies to use more flyash.

The recent draft notification suffers from drawbacks, say industry experts. According to K K Bhattacharjee, deputy general manager, Indraprastha Power Generation Co Limited, New Delhi, the focus is more on disposal than utilisation and will put more pressure on loss making firms such as his. "The notification has stressed that thermal power plants cannot stock flyash for more than three months. This way, all plants will be shut down," says K P Nyati, head (environment policy division), Confederation of Indian Industry. Nyati says a market for flyash should be developed.

"Earlier, thermal power plants supplied material free of cost. If they now start giving even the transportation costs, then it will devalue flyash. Construction agencies and manufacturers may take it and dispose it off at road sides or ponds. Who will monitor these? Who is going to monitor how they have used the flyash?" Nyati asks. The real culprits, according to him, are agencies like National Highway Institute and Central Public Works Department. "If they start using flyash, for say, road construction, it will decrease cement consumption by 50 per cent and even these roads will not need any maintenance for at least seven years," says Nyati.

The moef assures that the notification is only in the draft stage and things are not finalised yet. "We have got comments and feedback. We will try to incorporate them in the final notification," says Anandakumar.