With rapid population growth, the per capita water availability per year in India has dipped below the alarming threshold of water stress—1,700 cubic metre, says the United Nations World Water Development Report 2014. According to the international agency, the situation will worsen in coming years with increasing demands from the agricultural, domestic and industrial sectors.

The report has been published on behalf of the United Nations World Water Assessment Programme by UNESCO and other UN organisations. This is the first edition of an annual report addressing the issues "Water and Energy", in 2014 and was launched during the main World Water Day Celebrations in Tokyo, Japan on March 21, 2014.

With more than 1.2 billion people, India is the second most populous country in the world and is slated to be the most crowded nation by 2025. Parallel to its rapid population growth and increase of water consumption in all sectors, the country’s per capita water availability has declined three-fold over the past six decades (from over 5,000 cubic metre in 1951 to 1,600 cubic metre. The report says that agriculture, which accounts for 85 per cent of all water use, continues to be the national priority. Taking these factors into consideration, the combined demand for water is likely to reach or outstrip availability by 2050. This alarming projection calls for water-related issues to be given priority in all planning activities across the country. 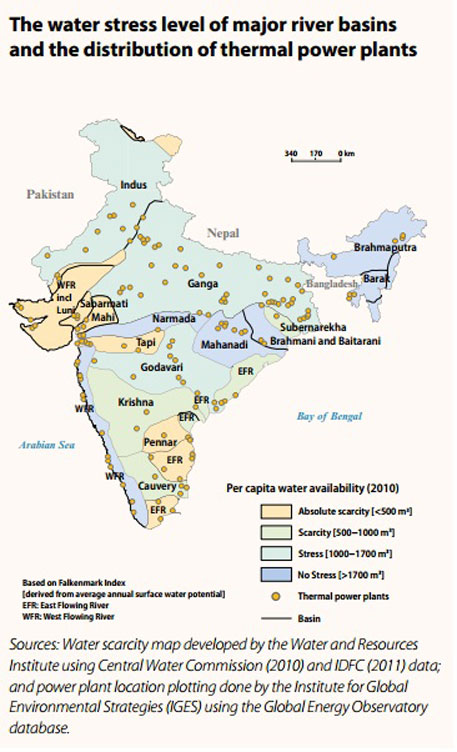 Any reduction in agricultural consumption will translate into a substantial increase in water availability for other sectors and the environment. However, the energy sector also has room for improvement in reducing its water footprint, says the report.

The report states that electricity generation in India is expected to increase rapidly to reach around 4,900 terawatt-hours (TWh) per year by 2050—about six times the 2010 level. Nevertheless, India’s installed capacity is dominated by coal-based and gas-based thermal power (56 per cent) followed by hydropower (23 per cent). 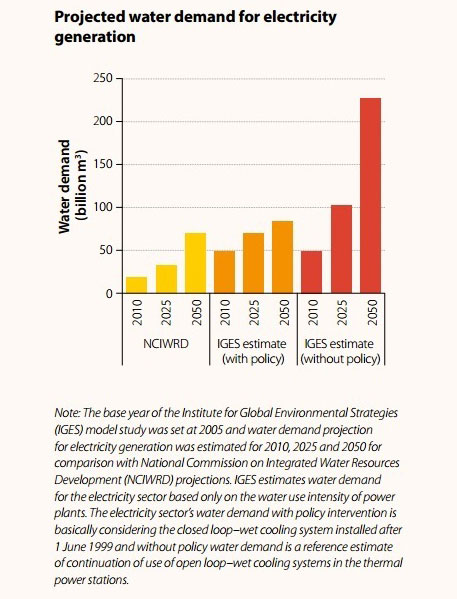 This means that thermal power plants (TPPs) form the backbone of the national power supply, generating almost 60 per cent of India’s electricity. But, almost one-quarter of the existing TPPs are equipped with open loop–wet cooling systems that use 40 to 80 times more water than the world average. They account for about 88 per cent of the total industrial water demand in the country. The older generation TPPs run on open loop–wet (OLW) cooling systems with an average water use intensity around 40 to 80 times higher than the current world average for closed loop systems.

While the energy demand is being supported by increasing shares of natural gas and renewable energy resources, the abundance of national coal reserves means that the dominance of coal-based TPPs is not likely to change, indicated the report.

The environmental impact of TPPs, especially those equipped with OLW cooling systems, is a concern. These plants release above-ambient temperature cooling water into rivers and canals, causing thermal pollution and adversely affecting the aquatic ecosystems. To minimise potential damage, India’s Union Ministry of Environment and Forests (MoEF) banned the construction of TPPs with OLW cooling systems in June 1999. The only exceptions allowed were power plants set up in coastal areas that can use sea water as a coolant. The recently introduced zero discharge policy also obliges operators to re-circulate and reuse water in TPPs. These two regulations help to reduce the amount of water used in thermal power generation. However, it has been estimated that around 25 per cent of TPPs are still using OLW cooling with high water demand. Retro-fitting cooling systems that conserve water in these old plants are not considered economical. Therefore, these plants will continue to function until they eventually reach the end of their designed lifespans.


The report finds it problematic that national planning for power generation does not fully take into account the issue of long-term water availability in the country. The findings of various basin-level studies illustrate that water availability may put the operational continuity of power plants in jeopardy. In fact, the geographical distribution of existing TPPs shows that more than 80 per cent of them are set up in either water scarce or water-stressed regions where electricity demand is expected to remain very high. A gradual transition to more water-efficient cooling systems in TPPs will reduce water demand and lessen the impact on the environment.

“To maintain its position among the fastest growing major economies in the world, India will have to reassess its long-term water use projections in view of general water availability, and continue to improve its water use efficiency in all sectors,” the report says.