It could be a bitter end to a sweet, juicy story. Maharashtra is planning mega power plants in Ratnagiri district, a horticulture zone known for its finest Alphonso mangoes, which are exported to Japan and Singapore. This year, farmers in the region exported the famous fruit to Europe for the first time. But they are not sure of the future of the business; they fear emissions from the plants could harm mango plantation.

What is at stake is more than the mango plantations.Two thermal power plants of a combined capacity of about 2,800 mw coming up in Ratnagiri have also raised the hackles of fisherfolk--hot effluents discharged into the sea could hamper fish breeding. While one plant by jsw Energy Ltd at Nandivade is under construction, the other in Dhopave by Dhopave Coastal Power Ltd is awaiting the green light from the Union Ministry of Environment and Forests (moef). Besides, a nuclear power plant of 6,000 mw is in the pipeline.

This, when the state government has declared Ratnagiri an export zone for mangoes. A representative from FoodCert, which issues certificates under the European Retail Parties Good Agricultural Practices, has said that in case of pollution from the thermal power plants, the certificate cannot be granted. This certification is a must for entry into European markets. The people in the region allege that the jsw Energy plant violates the environmental clearance process and the Coastal Regulatory Zone (crz) notification, 1991.

They do not understand why the government wants power plants in an ecologically sensitive area. The Ratnagiri-Sindhudurg Regional Plan for 1981-2001 cautions that authorities must develop a suitable strategy for all the developmental projects in the region since it is ecologically very sensitive. In 1991, the Maharashtra government declared it a "horticulture preferred" area. Government figures show that over 450,000 people are employed in the horticulture sector. Since 1991, under partial funding by the state government about 258,000 hectares (ha) of plantations have come up in Ratnagiri, of which about 51,000 ha was under Alphonso mango. The other plantations are of coconut and cashew. 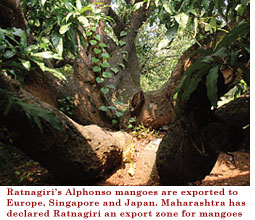 "But once the plants come up, Alphonso mangoes will be the worst affected," says Vivek Y Bhide, the president of the Ratnagiri Zilla Jagruk Manch, an organization leading the campaign against the power projects. His concerns may be valid. Studies have established that sulphur dioxide (SO2), produced on burning coal, harms the vegetation. According to a study by scientists from the Lucknow-based Industrial Toxicology Research Centre, published in the Journal of Environmental Contamination and Toxicology in December 1999, SO2 reduces the quality and quantity of mangoes. Madhav Kelkar of Pawas village, who started organic farming a year ago, fears his efforts will go waste because of the flyash and SO2 pollution. Officials at jsw Energy, however, say that the upcoming power plant will use imported low-sulphur coal.

The residents are not convinced. Bhide sites an example from Dahanu in Thane district where the production of Manilkara zapota, commonly known as chikoo, declined heavily after a thermal power plant started functioning there in early 1990s. A 2004 study by the Coimbatore-based Salim Ali Centre for Ornithology and Natural History also found pollution form the plant responsible for the decline in chikoo production.

There is another threat. "Flyash and hot, oxygen-poor effluents are going to be released into the sea. This will spell doom for fisheries, affecting thousands of fishermen," says P R Arun of the Mumbai-based ngo Green Alternatives. A report prepared by the Maharashtra Pollution Control Board (mpcb) and the National Environmental Engineering Research Institute (neeri), Nagpur, on the jsw Energy plant on directions from the Bombay High Court, pointed out in July 2007 that "hot water discharge locations are near or on the shore. The near-shore areas are potential fish-breeding zones and hot water discharge may have adverse impact on breeding areas."

Fisherfolk experienced exactly this kind of a situation in Jaigad creek in Ratnagiri after the power plant in Dabhol was started. "For three years we did not have enough fish stock. We could start fishing again after it was closed," says Jainuddin, 75, of Jaigad.

The upcoming jsw power plant also proposes a port to unload coal near the creek. Preparing the port will require dredging; another reason for the fisherfolk to be wary. The proposed port site also harbours corals, though the rapid environment impact assessment (eia) done by jsw Energy denied their presence. When Nandivade resident S N Jog sent a specimen to the National Institute of Oceanography, Goa, its scientist A R Gujar confirmed it was a coral of genus Porites found in calm water of lagoons.

Another problem is of coal storage. The proposed storage site is in the open on a hilltop. Farmers in Nandivade fear that in case of rain the washed chemicals will affect their crops down hill and contaminate groundwater. The mpcb - neeri report draws the attention towards the high wind speed at the project site. It says that such conditions should be considered in planning the handling of coal and flyash, and are particularly relevant in view of mango and cashew plantation in the surroundings. The report also said that the rapid eia did not address this vital issue adequately.

The farmers also complain of lack of transparency in public hearings for the project. The first public hearing was organized by mpcb in August 2006. It was conducted in English while villagers wanted it in Marathi and at the plant site. "The company did not even provide the eia report before the hearing," says Bhide. The second hearing was held in September 2006 at Nandivade. "This time local politicians, who were with the villagers during the first hearing, supported company officials. Villagers' objections were not recorded," he added. The Ratnagiri Zilla Jagruk Manch also dismissed as bogus the rapid eia for both the proposed port and power plant. "The eia report is a baseline document for decision-making and the rapid eia is far from adequate for evaluating a highly polluting industry like coal-fired power plant," says Arun.

The group filed a public-interest petition in the Bombay High Court, demanding a proper hearing. In May 2007, moef gave clearance to the plant for five years subject to certain conditions. The ministry said no activities should be taken up in crz, that is, within 500 m from the sea. It recommended a detailed study of the plant's impact on the Alphonso mango plantation and fishery. Later, the mpcb-neeri report recommended redrawing the environment management plan for the port and the plant. mpcb is yet to respond to the redrawn plan the company submitted. Environmental activists have now filed an appeal before the National Environment Appellate Authority against the clearance given by moef.

People say Ratnagiri has become an unofficial special economic zone for power plants when the need is for special ecological zone.