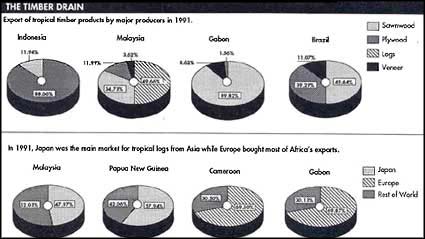 Many developing countries are reducing their export of logs. Only Africa continues to export a higher volume equivalent of logs than processed products: Logs accounted for 58 per cent of its total export volume in 1991.

Spurred by Indonesian exports of plywood and Malaysian exports of sawn wood, veneer and plywood, the Asia-Pacific region is also fast replacing log exports with processed products. Asian exports comprised 37 per cent of the total export volume in 1991, but are expected to drop to less than 25 per cent in 1993. While Malaysia continues to dominate world trade in tropical logs, Papua New Guinea has emerged as the second largest exporter of tropical logs.

Asian log exporters are essentially meeting the log demand of Asian countries, the most notable of which is Japan. But given the slow growth of Japan's economy, high consumer debt and depressed property prices, a slowdown is expected in its demand for tropical timber.

In contrast to the traditional developed markets, many developing or newly industrialised Asian economies like South Korea, Taiwan and China are expected to provide a major market in the future. The top 10 tropical log importers in 1992, according to the International Tropical Timber Organisation, in order of import levels, were: Japan, China (including Taiwan), South Korea, Thailand, India, France, Italy, Spain, Portugal and the Philippines.

Increases of this magnitude in log prices will push consumers towards other tropical log suppliers, non-tropical timbers and non-wood substitutes. But given the booming Asian economies, it is unlikely the demand for logs will decrease dramatically in the short term. The extra cash could go into better management of Asian tropical forests, but it could also tempt unscrupulous loggers to reap windfall profits.