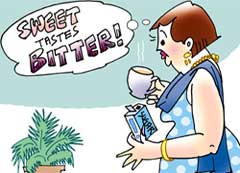 A sweetener that has been promoted for decades as a safe alternative to sugar to control diabetes, has been found to have harmful effects. Sucralose, sold as Splenda, not only does not reduce chances of diabetes among the obese, it actually increases blood sugar levels.

In a recent study published in the journal Diabetes Care, the authors concluded that consumption of sucralose, which is nearly 600 times sweeter than sucrose (table sugar), can have metabolic effects which can  lead to increase in blood sugar levels among consumers. The researchers tested metabolic effects of sucralose among 17 obese people—15 women and two men—who were not regular users of non-nutritive sweeteners or NNS, a category of sweeteners with low calorie; nutritive sweeteners like regular table sugar have high calorie levels. “We specifically studied obese people because NNS are often promoted to help decrease calorie intake and facilitate weight management in this population,” said the researchers in the study.

The participants underwent a five-hour oral glucose tolerance test on two separate occasions preceded by consumption of either sucralose (experimental condition) or water (control condition) 10 minutes before the glucose load.

The study, led by researchers at the Center for Human Nutrition, Washington University School of Medicine in the US, concluded that one dose of sucralose increased plasma glucose concentrations by .6 mmol/L, 20 per cent increase in insulin levels, and 7 per cent decrease in insulin clearance. It also indicated a 22 per cent higher peak insulin secretion rate.

“These data demonstrate that sucralose affects the glycemic and insulin responses to an oral glucose load in obese people who do not normally consume NNS,” concluded the researchers.

A K Jhingan, head and founder of Delhi Diabetes Research Center, said the study is important as it proves that what is sold in the market as beneficial to obese people is harmful for them, a fact that diabetologists have known for long.

“Sucralose has other adverse effects, too. More use of sucralose can cause fatty liver. The exact reason for this is not known. But artificial sweeteners are high-intensity sugar substitutes. They are being chlorinated for increased potency. Their consumption reduces healthy intestine bacteria, disturbing digestion of the consumer. They have to be metabolised by the liver, leading to fatty liver, one of the pre-conditions of diabetes. It is not just sucralose, other sweeteners, too, like asparatame, neotame, saccharin, stevia, fructose and spartum are harmful,” said Jhingan.

In 2000 the Scientific Committee on Food of the European Union on sucralose concluded that the substance “is acceptable as a sweetener for general food use” despite widespread opposition. The US Food and Drug Administration also approves it as an acceptable sweetener in food. So far, studies had proved metabolic effects among animals on consumption of non-nutritive sweeteners (NNS). The current study, thus, will help those who have been fighting against artificial sweeteners calling the claims of their producers baseless.