Tilapia fish may have killed gharials in Chambal 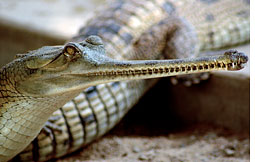 scientists seem to have come to a conclusion on what could have killed more than 100 gharials in Chambal waters recently. Tilapia, an invasive fish could have caused the deaths along the Uttar Pradesh-Madhya Pradesh border, says a new report. Circumstantial evidences suggest that the critically endangered reptiles could have consumed the fish abundantly found in the Yamuna which is polluted with heavy metals. The Yamuna meets the Chambal 40 km downstream of the affected area.

A toxin in the fish could have entered the gharials' body and damaged their kidney, resulting in gout-like symptoms and then death, says a recent report of the crisis management group (cmg) submitted to the Union Ministry of Environment and Forests on February 29, 2008. The team has not yet identified the toxin. The cause of the deaths has so far eluded the scientists (see 'Reason unknown', Down To Earth, February 29, 2008).

Several studies have already shown that tilapia, a hardy fish, can withstand high pollution and toxins such as heavy metals tend to get accumulated in its body. "The tilapia could have brought toxins from the Yamuna, where it is dominant," says D Basu of wwf India. cmg's survey found wide presence of tilapia and several pollutants where the gharials were found dead. The report says more such deaths might occur since the toxin seems to have affected several gharials.

cmg has asked the government to take immediate measures to clear Yamuna to save gharials. It said authorities could seek help from local communities that have been protecting the crocodiles.

The tilapia link has surprised gharial experts who say gharials usually spare the invasive tilapia. They feed on local fish. But villagers in the region says illegal fishing has led to a sharp decline in local fish, forcing the gharials to target tilapia, locally known as kawai.

"The gharials found dead were above a certain size; not small ones," says L A K Singh, a gharial expert with Orissa's forest department. Small gharials could have found tilapia too big or too quick to catch, he says.

Conservationists say tilapia could also harm human health and aquatic life. People in Chambal have been eating it, since few local varieties are available. Many now fear that tilapia, which is a predatory fish, may threaten fish in nearby rivers too.