To protect or to empower? 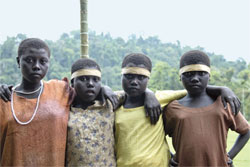 THE Centre is once again tied in knots over whether the Jarawa tribe should be protected in isolation or brought into mainstream. Brushing aside a policy formulated in 2004, a parliamentary standing committee on March 21 asked the Centre to bring the tribe into the mainstream.

With a population of just about 300, Jarawa is an ancient tribe of the Andaman and Nicobar Islands and has little immunity to outside illnesses. The Policy on Jarawa Tribe of Andaman Islands mandates limited interference in the tribe’s cultural life. No attempt should be made to bring the tribe into the mainstream against their will, the policy states. But for long, some politicians, including member of Parliament from the islands, Bishnu Pada Ray, have been demanding an aggressive policy to integrate the tribe into the mainstream.

The parliamentary standing committee on social justice and empowerment had given a similar recommendation in August last year and said that minimum damage to the tribe and its cultural heritage should be ensured.

“At this juncture when many Jarawas are willing to come into the mainstream and lead a modern lifestyle, it would not be appropriate to suppress their voice and leave them in total isolation, unattended and without care,” the committee said in its Report on Demands for Grants.

In September 2010, the tribal affairs ministry constituted a committee headed by its secretary to review the policy. However, it did not initiate further action. Last year, the National Advisory Council (NAC), headed by UPA chairperson Sonia Gandhi, asked the ministry to review the policy. The ministry’s committee then asked the Andaman and Nicobar administration to send a group of experts to the middle and south of the islands to assess “the actual perceptions, needs and expectations of the Jarawas”.

The expert group examined the situation and suggested that the government conduct a social impact assessment, and monitor movement patterns and nutrition of the Jarawas. It said the Jarawa policy should be changed to empower the tribe to deal with the challenges of integration with the mainstream (see ‘Jarawas: To protect or not’, Down To Earth, February 15, 2012).

The ministry’s committee, however, told NAC that there was no need to change the policy. In fact, it said that the recommendations made by the group of experts were already covered in the policy. The Andaman and Nicobar administration must undertake evidence-based research studies if changes are to be made in the policy, it said. The ministry sent the committee’s report to the parliamentary standing committee.

But the parliamentary panel did not buy the ministry’s argument. In its recent statement it said there is a need to undertake research on topics suggested by the group of experts. “The committee reiterates its earlier recommendation to review the policy on the Jarawa tribe and bring necessary changes in the policy which should facilitate a slow and smooth process of transition,” it says. The government should send a fresh action taken report to the committee within three months, it said. Tribal ministry officials refused to comment on the parliamentary panel’s stand.