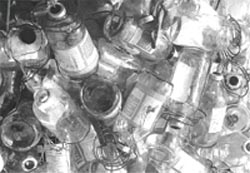 Tonnes of garbage -- including hazardous hospital waste -- illegally exported to the Philippines in a government-chartered vessel was returned to Tokyo. The shipment was made by Nisso Limited, an industrial waste disposal company located in Oyama, Tochigi Prefecture and included such infectious medical waste as used hypodermic syringes, containers of intravenous drips, disposable diapers for adults and scrap plastic.

Investigations were initiated into the garbage shipment as it is in violation of the statutes laid down by the Basel Convention of 1992 on the shipment of hazardous waste. The Japanese government had to pay 60 million yen in transportation and other costs as the president of Nisso Limited went missing.

Workers at the Oi Pier port in Tokyo unloaded 122 containers of waste matter, weighing 2,700 tonnes in all, from the mv Pulsar . Officials from the international trade and industry ministry and the environment agency were present at the unloading.

Commenting on the shipment, Ayako Sekine, 31, a member of Greenpeace Japan, said she was ashamed of the garbage transportation to the Philippines because it caused "profound distrust toward Japan in the international community." Sekine said: "The government should strengthen its supervision to prevent such an incident from being repeated."

The Philippine government had sent an official report about the shipment to the Japanese government in December. Following this, the Japanese government sent inspectors to the Philippines to investigate the claim and they confirmed that the garbage did contain hazardous hospital waste. The government ordered Nisso Limited to immediately recover the waste and accused it of violating the Foreign Exchange and Foreign Trade Control Law. An Environment Agency official said, "We had to act promptly as a Philippine newspaper wrote that the shipment was 'Japan's third invasion following the war and economic invasion.' Otherwise, it would have become a serious diplomatic issue."