Forest fragmentation can have detrimental effects on the flora and fauna, leading to a loss of biodiversity 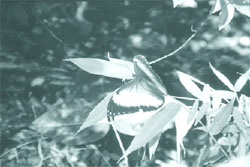 forest fragmentation, the world over, is associated with widespread animal extinction, loss of biodiversity and damage to the ecosystem. The two basic ways in which forest fragmentation affects natural biodiversity are, firstly, a reduction in net area of natural habitat available to the animals surviving in the patch. Secondly, in place of a single, large forest patch, a number of forest patches are created that are located at a distance from each other. This impedes movement of animals from one patch to another, thus affecting their normal activities. Disruption of forest continuity also reduces the chances of a patch being naturally restocked by animal movement from nearby more favourable areas. These were the findings of a team of biologists headed by John Terborgh of Duke University, Durham, North Carolina in usa , aided by students and scientists from Peru, Venezuela, India and Germany.The team, for the past many years, has studied the impacts of forest fragmentation in Lago Guri, the world's second-largest rainforest, located in eastern Venezuela.

Initial survey done by the researchers indicated that most of the forested islands in Lago Guri were devoid of more than three-quarters of ther natural fauna such as jaguar, ocelot and puma, common butterflies,dung beetles, insect-eaters such as armadillos, and ant-eaters apart from several primate species. In the absence of much of the regional fauna, the densities of the few species surviving on small Lago Guri islands were found to be conspicuously more than that in the nearby mainland. For example, in the absence of the armadillos and army ants, densities of leaf-cutter ants on small islands had multiplied by almost 50 times compared to that in continuous forests. Further investigations confirmed that population explosions were the rule in the Lago Guri amongst herbivores that normally fall prey to jaguars, pumas and ocelots.

Specialised insects, such as fruit-feeding butterflies, were also highly vulnerable to extinction on the Lago Guri islands. For these mobile insects, that depend on just a few plant species for reproduction, survival on the island appears to depend almost totally on repeated colonization from the mainland. The species that were slow in colonizing as they cannot cross open patches between islands, lost their population on these islands. On the other hand, even species that could escape to these islands found it difficult to establish populations due to the rarity of the plants that their larvae feed on and the fruits that the adults depend on. Another group of specialised insects, the dung beetles, which require animal dung for survival, were also conspicuously absent from the Lago Guri islands because of lack of colonisation across the open water of the lake.

The researchers also came across an island surprisingly bereft of bird song. A large group of capuchin monkeys were the reason behind this unusual happening. These monkeys were stranded here during the inundation of the reservoir. Being 'imprisoned' in an area less than one-tenth the size of their normal home-range and, therefore, facing food shortage, these omnivorous creatures were raiding almost every bird nest on the island.

Changes in animal fauna sooner or later have an impact on the health of the forest. Preliminary signs indicated visibly reduced tree regeneration on the islands. Detailed studies indicated that right from the seed stage, the growth and survival of forest trees faces a challenge from a variety of sources: seeds falling on the forest floor are immediately preyed upon by over abundant rodents while small seedlings and saplings are clobbered by leaf-cutter ants. To add a twist to the story, ants prefer to feed on plants that contain little or no plants poisons and, therefore, encourage the survival of a selected set of species that contain these compounds. If saplings finally make it to the adult age, pollination and seed dispersal are surprisingly difficult in the absence of the correct animal species.

Studies by Nigel Asquith of Duke University indicated that in the absence of the agouti, a medium-sized rodent that uses its strong teeth to open its hard seed pods, an important canopy tree species, Hymenaea , was possibly on its way to extinction on many islands. Given the scarcity of normal insect fauna, it is likely that important plant pollinators are also absent. Trees also suffered high mortality rates due to drier soils and high exposure to winds, features that are common in forest fragments. This is because, with a decrease in size, the length of any island edge increases disproportionately in relation to interior or unexposed habitat, which enjoys relatively more protection from wind and sun.

Research indicates that the present tree community may be replaced in the future by a very different set of tree species, if at all.


The Lago Guri study has unequivocally shown that there exist an intricate relationship between animals and plants and consequently the 'balance of nature' can be affected in innumerable ways if forests are fragmented. Although the impacts of forest fragmentation have been studied in detail the world over, biologists in India still do not recognise its importance for forest conservation. So far only a few studies have been carried out, such as one in the Annamalai hill range in Tamil Nadu.

In view of the vulnerability of flora and fauna in habitat fragments, it becomes relevant to assess how inviolate protected areas are. Most of India's protected areas exist as islands in a sea of humanity. In addition, the protected areas comprise small-sized wildlife sanctuaries. Recent documentation by Delhi-based Indian Institute of Public Administration reveals that out of the 21 protected areas in the state of Karnataka, only six are more than 50,000 hectares in size, which is considered necessary to support viable populations of top carnivores such as tigers and wild dogs. In many of these areas, it may be too late to restore the normal functioning of the ecosystem, as predators, pollinators and crucial rare plant resources may have disappeared long ago.

Smaller protected area also mean higher edge-to-interior ratios, which, in turn, simply increases vulnerability of native plant and animal species to the ravages of humans, weather and invasive species alike. A study by researchers at Pondicherry University found that most of the islands designated as protected areas in the Andaman and Nicobar archipelago are too small to protect rainforest butterflies native to the region. Being more exposed to the wind and sun, small islands tend to be dominated by deciduous vegetation. Only islands above a particular size thus can sustain rainforest vegetation together with all inhabitants, over long period of time.

Given the visibly high degree of forest fragmentation in India, it is possible that many habitats now exist as 'living dead forests', where the presence of a tree canopy belies the absence of a healthy ecosystem in which vital ecological process continue to operate. Thus, implications of the Lago Guri research for biodiversity conservation the world over, especially for the diverse ecosystems of the tropics, are immense. But a lot more research needs to be done in order to save thousands of animals from becoming extinct.