Toxic dump in Karachi talk of the town 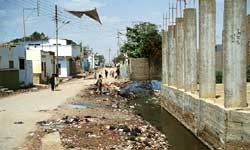 as many as 14 children suffered burns on November 3, 2006, when toxic material was allegedly dumped by Berger Pakistan (Pvt) Limited in Rahimshah graveyard in Orangi town in Karachi. The children spotted cement bags in the graveyard and took them to their locality in the hope that they would sell them and earn some money. But some of the bags contained a black-colour material that was inflammable and wounded the children when they tried to ignite them.

This incident comes few months after toxic waste affected 21 people, mostly children, in the Sindh Industrial Trading Estate (see 'Industrial waste causes havoc in Karachi' Down To Earth, June 15, 2006). There are confusions galore as evidence of the waste now appears to missing. Laboratory reports are not conclusive either.
An action committee formed after the incident of toxic waste dumping in the Sindh Industrial Trading Estate has on its own filed a petition in the Sindh High Court against dumping of the alleged toxic material in Orangi.
Environment minister Saghir Ahmed seems to be in a fix. "Officials of the company maintain that they were supposed to dispose off the waste outside the city limits but the driver they had hired, acting on his own, had dumped it in the Orangi graveyard," Ahmed said. "But it seems the culprits have been quick to remove the toxic material from the dump to destroy the evidence. So far, the government has not been able to find any thing toxic in the samples sent to the laboratories," he said. "There are rumours that the material was nothing but firecrackers," he added.

The Sindh Environmental Protection Agency (sepa) had sent samples of the alleged toxic material to the Pakistan Council of Scientific and Industrial Research Laboratories (pcsir). But pcsir failed to zero in on anything. In a letter addressed to a senior scientific officer, sepa, Syeda Rumla Naqvi, industrial liaison officer, pcsir, said, "... It is to inform you that it is useless to do analysis on the said samples. Chemicals when mixed may react to one another or with soil. After the reaction or with time they lose their properties and activity. Now, it is not possible to know what the explosives constituted and what caused the burns."
Iqbal Saeed Khan, former director sepa, thinks something is fishy. "If they were highly reactive chemicals then there is every possibility that after the completion of reactions, the composition of chemicals could have changed. sepa should have kept part of chemicals with them for a cross check," he said. "The maintenance of the National Environmental Quality Standards (neqs) is the responsibility of all industries which are bound to neutralise/treat toxic waste before its disposal," he added. He, of course has reasons to feel disgruntled (see 'Pakistan's toxic waste case takes new turn', Down To Earth, September 15, 2006).

Abdul Malik Ghouri, the director-general of sepa, says there was no eye-witness to ascertain who was responsible for dumping the waste. Besides, "I have been asked to keep quiet", he says without divulging details on who was trying to pressure him. According to Ghouri, he collected samples of the toxic waste and issued notices to the factory owner, in accordance with the Pakistan Environmental Protection Act, 1997. But it now appears that the industrial lobby is trying to hush the case.
"The government says that they have privatised the disposal of solid waste of each town. But it's quite obvious from the Orangi incident that the solid waste is not being disposed where it is supposed to be disposed," said Perveen Rehman, director, Orangi Pilot Project Research and Training Institute.

People term such incidents as commonplace occurrences. "The Orangi incident points to the apathy on the part of sepa and the health department. Dumping is happening, and most of the time, is not recorded," said Qaiser Sajjad, secretary general, Pakistan Medical Association, Karachi.