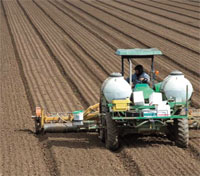 THOUGH nitrogen and nitrates occur naturally, they are at levels that do not harm. But concern is increasing about high concentrations of nitrogen leaching into aquifers from synthetic fertilisers and manure applied to cropland, resulting in nitrate pollution. High-nitrate levels can cause cancer, reproductive disorders and can be lethal for infants.

Now a study has shown how nitrate contamination of groundwater in some of California’s most intensely farmed regions has grown worse in recent decades. The contamination will continue to spread, threatening the drinking water supplies of more than 260,000 people, it says. The team from UC Davis Department of Land, Air and Water Resources analysed groundwater data of Tulare Lake Basin and Salinas Valley of California. They found that more than 90 per cent of the contamination comes from farms, ranches and crops. It says that nitrate in drinking water today came from nitrates introduced decades ago. “Decades from now nitrate in water will be from today’s discharges. Nitrate contamination will be an issue for years to come,” says Thomas Harter, the lead author.

The study which was mandated by legislation in the state in 2008 also notes that removing nitrates from groundwater is costly and not feasible. It says the cost of treating drinking water would increase over time as more nitrate percolates. The study thus suggests an approach based on fertiliser management and water treatment systems. Laurel Firestone, co-executive director of Tulare County’s Community Water Centre, suggests a fertiliser fee could help control nitrate contamination.

In India, high levels of nitrate contamination have been reported from agricultural areas and have been linked to intensive use of fertilisers. A study conducted by Greenpeace India, a non-profit, in November 2009 in Punjab found an average fertiliser application rate of 322 kg nitrogen per hectare, higher than the average rate of 210 kg nitrogen per hectare, set by the Fertiliser Association of India. The Davis study found an application rate of 221 kg nitrogen per hectare in high nitrate area. “While nitrate pollution can stem from many sources, overuse is prevalent mainly in Punjab, Haryana, Uttar Pradesh and coastal peninsula, which comprise 10 per cent of all agricultural area,” says N Raghuram, associate professor at Indraprastha University, New Delhi. He adds, preventing accumulation of reactive nitrogen is the best solution. “Recycling unwanted nitrogen compounds from other sectors towards agriculture could be an option.”