Retiring ships to be regulated by hazardous wastes treaty 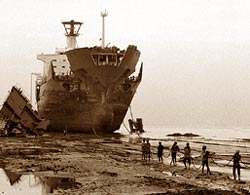 the global treaty regulating the cross-border movement of hazardous wastes will now also apply to ships that become hazardous wastes when they cease to be in use. The decision was taken by 114 member countries of the Basel Convention on the Control of Transboundary Movements of Hazardous Wastes and their Disposal during their seventh Conference of Parties (cop-7), held in Geneva, Switzerland, from October 25-29, 2004.

Recognising that ships containing hazardous materials, such as asbestos, pcbs, toxic paints and fuel residues, could themselves become hazardous waste, the members decided that countries exporting ships for recycling should seek the prior informed consent of importing countries. They also stressed that the global management of ship dismantling must be made environmentally sound. The decision on ship dismantling encourages developed nations to develop domestic ship recycling facilities. This would reduce their need to export ships to countries with limited capacities to manage the hazardous wastes contained in them. Countries like India, China and Bangladesh, which have huge ship-breaking facilities, have to bear the burden of such toxic substances. But since ship-breaking activity is a major economic activity for them, providing employment to thousands of people, some of them emphasised the need for de-contamination of waste ships prior to export rather than no export at all.

Since the International Maritime Organization (imo) regulates ships throughout their life, Basel Convention members requested it to develop mandatory requirements to ensure at least an equal level of control on ships as agreed under the Basel Convention. This is to ensure that imo laws do not become an escape hatch. The convention also requested its subsidiary body, the open-ended working group, to present proposals on a legally binding solution on ship dismantling at cop-8.

The issues of waste minimisation and ban on transboundary movement of hazardous wastes from industrialised to non-industrialised countries were also discussed. Countries had different views on the meaning of waste minimisation. While some insisted that it meant a reduction in the amount of waste destined for final disposal, others said it meant a reduction of the volume of wastes generated. Matters also remained uncertain with regard to the ban, which is yet to enter into force for want of requisite number of ratification.