If nothing ever changed, there’d be no butterflies

A formula  that tracks change, the only constant in life, is quite intriguing.

Using new mathematical tools, biologists Martin Rosvall and team from the University of Washington in usa, studied over 7,000 scientific journals, and mapped the important changes in the past decade and arrived at a major conclusion—with the brain still an enigma, neuroscience has taken centrestage. 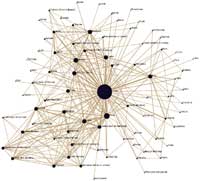 In 2001, 102 journals led by The Journal of Neuroscience, Neuron and Nature Neuroscience assumed significance in the field of scientific discoveries.

Brain, Behavior, and Immunity and Journal of Geriatric Psychiatry and Neurology split from psychology to join neuroscience in 2003. Following such paradigm shifts, neuroscience went from being an inter-disciplinary topic to a stand-alone subject like physics or mathematics in 2005.

With diseases like bird flu, sars and swine flu playing havoc in the last decade, it is not surprising that the study of infectious diseases also gained significance as an independent field.

D etecting changes in large networks has been a problem. Lack of adequate tools translated into an inability to differentiate between signficant change and irrelevant data. The new mapping technique overcomes that.

The tool can also be used to understand air traffic networks, map changes in the world’s financial systems or even track the spread of diseases through human populations. One has to understand the network of contacts through which the transmissions occur, said Carl Bergstrom, biologist from the University of Washington and a partner in the study published in PLoS One on January 27.