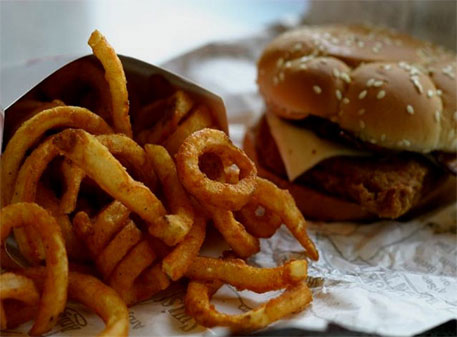 Higher consumption of dietary trans-fatty acids (dTFA) has been linked to worsened memory function in men who are 45 years old and younger. These acids are used in processed foods to improve taste, texture and durability.

A research published by University of California, San Diego School of Medicine, on June 17 in journal PLOS ONE, has established the link. For the study, researchers evaluated data from 1,018 men and women who were asked to complete a dietary survey and memory test involving word recall. On an average, men aged 45 and younger recalled 86 words; however, for each additional gram of trans fats consumed daily, performance dropped by 0.76 words. This translates to an expected 12 fewer words recalled by young men with dTFA intake levels matching the highest observed in the study, compared to otherwise similar men consuming no trans fats.

What is trans fat?

Trans fat, a type of unsaturated fat that behaves like a saturated fat due to its chemical structure is of two types—natural (found in beef/pork/dairy products) and artificial (obtained from processed foods). It is responsible for raising the body's low density lipoprotein (LDL), also called the “bad” cholesterol and lowers the high density lipoprotein (HDL), the “good” cholesterol. Overall, this increases the total blood cholesterol level which is a major risk for heart disease. The study by the University of California in San Diego states that trans fats can be linked to loss of memory is an addition to the problems already associated with these hydrocarbons.

"Trans fats were most strongly linked to worse memory in men during their high productivity years," said Beatrice A Golomb, lead author and professor of medicine at University of California, San Diego School of Medicine. "Trans fat consumption has previously shown adverse associations to behaviour and mood—other pillars of brain function, however, to our knowledge a relation to memory or cognition had not been shown," adds the researcher.

“Our study did not include people with dementia, but the association between trans fats and worse performance were fairly sizeable. The study looked only at a short term memory task," said the author when questioned if severe memory disorders such as dementia could be a result of high trans-fat consumption. "But the findings build on our prior findings show adverse associations to other domains that brains are involved in governing and higher trans-fat consumption is linked to worse mood, and more aggressive behavior," the author added.

The study focused predominantly on men because of a small number of women in this age group. However, including women in the analysis did not change the finding, said Golomb. An association of dTFA to word memory was not observed in older populations. Golomb said this is likely due to dietary effects showing more clearly in younger adults.

A note of caution

A 2012 study by Oregon Health and Science University in Portland has measured blood levels of trans fats in relation to brain volume using MRI brain scans. Researchers suggest that trans fats in the diet replace healthy fats in the brain’s cell membranes, which affects the ability of the brain to function properly. When trans fats become part of the cells and nerve sheaths, they replace vital brain fats like the essential omega-3 fatty acid DHA. As a result, cellular communication suffers, the cells degenerate, brain volume shrinks, and memory and cognition suffer, concluded the research. Beatrice Golomb, while talking to Down To Earth, said that their research is not about the mechanism but at outcome—the actual memory performance.

Nikhil Raheja, a Delhi-based psychiatrist told Down To Earth that though India has not been a part of a research where trans fats can be linked with memory loss, his experiences of treating kids as a psychiatrist reflects that those who consumed more trans fats were vulnerable to physical as well as mental damage. When asked if IQ level of a child from Urban and Rural area would differ due to the effects of trans fats, the doctor replied that the trans fats consumption would differ by 5 to 10 per cent in terms of consumption between the two children and the level of intelligence has a high chance of being affected. Moreover, children from urban areas are expected to be affected with memory problems such as transience, blocking and absentmindedness due to high level of trans fatty acid consumption. “Trans fats or the unsaturated fatty acids are formed due to hydrogenation that requires very high temperatures to be applied by the industries manufacturing processed food. However, the natural trans fats are not as harmful and the heat that is provided by the animal body (beef/mutton) can’t be extremely high”, says Raheja. He further adds that the mutton or beef burgers from fast food chains contain high levels of trans fats, as compared to home cooked mutton.

A fat to forget: Trans fat consumption and memory