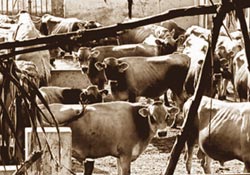 Two years ago, Andhra Pradesh (ap) and West Bengal (wb) imported a herd of pedigree cattle from Australia for a government cattle breeding programme. Since April 28, 2002, the cattle have been quarantined in Chennai. Today, only 102 animals are alive; 116, including calves born in quarantine, have died. Probable cause of death: unsanitary conditions, lack of food and shock.

The Union government's department of animal husbandry and dairying (dahd), which controls the quarantine, had ordered in 2002 that the cattle be sent back to Australia. Reason: blood samples sent to the High Security Animal Diseases Laboratory in Bhopal showed some animals testing positive for bovine viral diarrhoea (bvd) and malignant catarrhal fever (mcf).

Samples were also sent to the Weybridge laboratory in the uk, an international referral laboratory (irl) for bvd designated by the Paris-based World Organisation for Animal Health (oie, after its French name). Their results showed the animals were not infected, though some had antibodies for bvd, implying they were resistant to the disease. The Union government went by the report of its Bhopal laboratory and ordered that the cattle be sent back. Australia refused the animals entry. Another round of testing, and the Union government ordered 87 animals be euthanised, killed.

Gouher Aziz, secretary of an animal rights group called Bharatiya Prani Mithra Sangh in Chennai, then approached the High Court of Madras and obtained a stay order that prevented the deaths. A few months later, the court ordered the release of 46 animals, cleared by both laboratories, to the ap and wb governments.

The Union government appealed this decision in the Supreme Court. It claimed "the direction for release of 46 cattle is highly erroneous, arbitrary and illegal". For "none of the states/union territories have so far reported the incidence of bvd and mcf. In case these animals are released, both diseases shall have to be reported by India to oie and this will adversely affect the international trade of the country..." Another reason was the ap Livestock Development Agency (aplda) had selected 220 animals, while the Australian quarantine released only 201 -- 19 animals were kept back after testing positive for three diseases including bvd. The Union government suspects these animals infected the herd: "It was only by fraud that the cattle were imported from Australia." But the results from the pre-export quarantine in Australia were negative for the 201 cattle.

The Supreme Court referred the matter back to the high court, asking it to decide on the matter by June. The high court hasn't given a decision yet; work is suspended due to a lawyers' strike in Chennai.
There is good reason to believe that bvd prevails in India. In fact, bvd cases have been reported from the cattle farms of the Union government. In 1999 oie's journal Scientific and Technical Review published a paper entitled 'Prevalence of bovine viral diarrhoea virus antibodies in India'. It reported a 1996-97 study showing " bvdv infection is widespread in India", bearing a "clinical resemblance to rinderpest". The study was based on 439 samples -- 327 cattle and 112 buffalo -- from 17 states of India. It said the overall mean prevalence of the bvd virus was more than 17 per cent in the 17 states. The Bhopal laboratory officials give another reason for the euthanasia: India doesn't have the strain of bvd virus found in Australia.

Gouher Aziz and aplda officials stress that none of the animals showed any symptom of the diseases the Union government describes as "fatal" and "highly contagious". Moreover, the quarantined animals have been seen grazing, as there is not enough fodder. They mix with other animals while grazing. aplda, meanwhile, claims the total expenditure on nine staff posted in Chennai is Rs 60,000 per month and that on animal feed may come to Rs 1 lakh per month. Besides, milk produced by these animals is allegedly sold.

The activists blame the Union government of double standards. "A consignment of six tigers imported from the uk and meant for Bannerghatta national park near Bangalore two years ago was not even kept in quarantine," Gouher alleges. She also mentions that the Kanchi Kamakoti Peetham near Chennai got a consignment of cows without going through quarantine. In hushed voices, people ae questioning the expertise of the committee appointed by the Union government that ignored the results of irl, Weybridge.

With half the animals already dead, the issue is now about insurance money. Each bull of the Holstein-Friesian breed is insured at Rs 1.75 lakh; that of the Jersey breed at Rs 1.64 lakh.