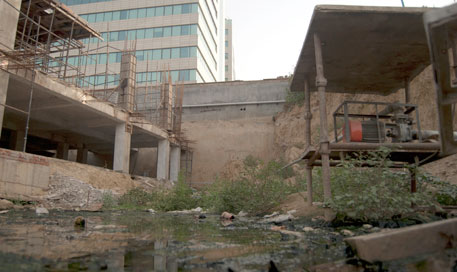 The Punjab and Haryana High Court has directed the principal secretary of Haryana's town and country planning department to ensure that no tube well is operational for construction purposes in Gurgaon. The official would be personally liable if the directives are not implemented in earnest, the court said on August 21. The order follows an earlier order of the court prohibiting groundwater extraction for building projects. To help out the developers, the state authorities have, meanwhile, made available some of the city's treated sewage so that construction activity can restart.

The court’s order is in response to a petition filed in 2008 by Sunil Singh, a lawyer, alleging that real estate giant DLF was illegally operating 28 wells to service its commercial office hub, Cyber City. The scope of the case has since expanded to check rampant extraction of groundwater across the city, and to also ensure adequate piped water supply.

On paper, the state government claims that all the construction work has been stopped. The government identified 162 illegal bores at 80 sites, of which 58 have been sent notices, whereas others have been sealed. The notices follow an investigation which revealed that illegal borewells were installed and operating in gross violation of the July 31 directive issued by the Punjab and Haryana High Court, directing that all groundwater usage for construction work be stopped immediately.

The deputy commissioner has reportedly sealed 506 borewells till August 13. Show cause notice have been issued by the town and country planning department as to why licences of projects should not be cancelled. “Sadly, this is only on paper and far from the ground reality as only small builders have been made scapegoats,” says Nivedita Sharma, lawyer working on the case.

“Builders appeared and made a submission to the court for the stay to be lifted. But the court, which has been showing much enthusiasm in monitoring the situation, refused outright,” says Amit Singh, lawyer for the petitioner. In an earlier order on July 16, the court observed that “there is also nothing on record to show as to how much water is needed for carrying out construction of the buildings in the city”. The interim order put a stop to new construction. “No building plan for construction shall be sanctioned unless the applicant assures the Haryana Urban Development Authority (HUDA) that for carrying out the construction underground water will not be used and also to show the source from where the water supply will be taken for construction purposes,” the court had said.

As per government records, the water requirement in Gurgaon is approximately 80 million gallons per day (mgd) or 360 million litres a day (mld). The government set up three water treatment plants of 90 mld each in 1995, 2005 and 2009. Five years ago, the development plan of the city was revised for a population of 3.7 million, keeping in mind the requirement until 2021. The authorities sought to enhance the capacity of the existing channel that sources water from the Western Yamuna Canal at Sonepat, 69 km away, from 100 cubic feet per second (cusec) or 2.83 cubic metre per second (cumec) to 175 cusec (4.95 cumec) at a cost of Rs 19.63 crore.

The state government, in response to an order last month, submitted to the court that water supply would be augmented by 99 mld to meet the demand deficit. More water will be made available by the irrigation department in six months when the NCR canal, at a distance of 69 km from the city, will be operationalised with a planned capacity of 14.6 cumec. This has been constructed at a cost of Rs 322 crore, and as submitted in the state government affidavit, is likely to be completed in three months. Additional water treatment capacity of 90 mld to meet the shortfall is likely to be functional by March next year.

Raw water for construction from October

For construction, the state government has said that raw water from the canal can be made available from October to licensed construction projects on payment at the raw water tanks at the waterworks. Projects in sector 1-57 have a requirement of 6.75 mld, sector 58-115 of 29.25 mld and 4.95 mld as reported by the municipal commissioner of Gurgaon.

HUDA has been trying to make alternate arrangements following the high court's July 16 order barring use of groundwater for construction. To circumvent the order, they have now made available 9.9 mld of treated sewage that can be used by the construction companies. According to the state government,  a 54 mld tertiary treatment plant will be functional in the next two years. Officials also claim to have constructed rainwater recharge areas in 11 locations with plans for 300 more such structures.

The court has directed that all officers, including the deputy commissioner, in the concerned case be present for the next hearing slated for September 4.