Arid and semi-arid zone trees, especially those belonging to the genera prosopis, have become threatened species. 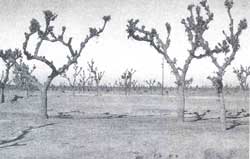 TREE SPECIES in arid and semi-arid lands across the developing world are disappearing due to an increasing demand for fuelwood and fodder and by progressive desertification, all of which is threatening plant genetic material. Arid zone trees, especially genera prosopis and acacia, have been identified as priorities for conservation by the Food and Agriculture Organisation (FAO).

This erosion of genetic material is continuing despite the urgent and recognised need to conserve arid zone genetic resources. Even if a whole tree species is not under threat, variations within the species that have adapted to particularly harsh environments are definitely endangered. FAO's forestry department, in collaboration with the national institutes of developing countries, is actively promoting the exploration, conservation and genetic improvement of tree species.

Because prosopis can thrive on the poorest of soils -- even saline soils -- and very low rainfall areas, it is ideal for afforestation programmes. Species such as P. juliflora and P. glandulosa are foreign but P. cineraria is indigenous to India and is known in Rajasthan as khejri. In times of water and food scarcity desert-dwellers in India look on to khejri as their kalpa vriksha (all-providing tree). The P. juliflora strain was introduced in India in the late 19th century, and subsequently, several other strains were introduced. Some hybridisation between the various species appears to have occurred and efforts are under way to identify the superior varieties.

Farmers grow khejri in cultivated fields and grazing lands because they know from generations of experience that vegetative growth is better under khejri, which provides fuelwood and fodder in abundance and whose pods are used for human consumption.

P. cineraria is also found in Pakistan and South Yemen though there are reports of genetic erosion from the latter. Says FAO's Christel Palmberg-Lerche, "Prosopis cineraria is a very interesting and important species. In South Yemen, two outlying populations of the species are in danger of grave genetic depletion due to overgrazing. Prior to the political upheaval in the country we had assisted the range and forestry service to demarcate in situ conservation stands of the species. We aim to contact the government again, now that the situation has calmed down."

Efforts are also on to introduce the species in other countries and seeds from India, Pakistan and South Yemen have been distributed to countries as far apart as Argentina, Brazil, Chile, Denmark, France and Kenya. Says Palmberg-Lerche, "We are in the process of making an overall assessment in the more than 30 countries that have established field trials."

According to a CAZRI study, it should be possible to undertake genetic improvement programmes on the khejri. Seeds from a few selected trees have produced very fast-growing seedlings and data available at CAZRI shows there is a "wide genetic variability in mean height, even within the same line, and hence further screening to select a fast-growing line, is possible."

Environmentalists, however, say no efforts have been made to involve the people in the conservation efforts even though they worship the tree.