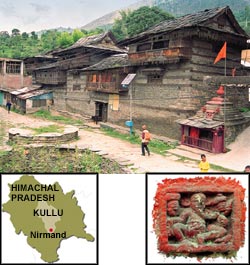 Nirmand, a village some 200 kilometres from Shimla, is on its way to 'development'. But those interested in art and architecture see it primarily as a threatened heritage site. The village is home to some of the finest and oldest specimens of hill architecture in India. These structures are now fast on their way out, and panicky art lovers are crying that the village ought to be declared a heritage site immediately, in order to protect what is left of these magnificent structures.

People here are no longer interested in preserving their ancient houses. Wooden houses with slate stone roofs are being replaced with modern structures. Villagers say it is no longer feasible to continue building these houses.

To start with, there are no longer forests close at hand, and logging planks and beams has become expensive and difficult. Besides, obtaining slate for the roofs involves quarrying these stones from mines and then carrying them back to the village on mules.

"It is easy for outsiders to say that we should build our houses the old way. Building a concrete house takes me only a few months. But if I were to construct a house in the traditional style, it could take years, and will be much more expensive," says J L Bharadwaj, a villager. "To start with, I would have to make countless rounds of the forest department office for sanctioning of trees. When that is arranged, I will need to find a traditional carpenter, who will work at a leisurely pace. And then there are the slate stones for the roof. Sand, bricks and steel for concrete houses are just one phone call away."

An oft-cited reason in defence of ancient hill architecture is that it was based on a strong understanding of the needs and limitations of the habitat. A 1984 intertecht study notes that the gable roof structure in hill architecture is covered with slate shingles. This slanting roof ensures that snow and water do not collect on the roof. The sloping beams forming the framework of the roof are made of sawn wood, with horizontal beams along the length of the roof. This architecture conforms to the seismicity of the region. The new concrete houses, on the other hand, are not designed for a mountainous terrain. Among the perils the new architecture poses is the fact that it does not conform to the region's seismicity.

Today, however, concerns and circumstances have changed. The traditional architecture of the area was based on locally available materials. Forests were close at hand, and slate was easily available. These materials are no longer accessible.


Nirmand is considered one of the oldest villages in the western Himalaya. The village was once the seat of Vedic learning. Even today, some of the ancient houses could easily transport one to the early times. The broad, winding cobbled paths, the exquisitely carved wooden houses with small doors and verandahs that project out of these structures, the slanting slate stone roofs and large courtyards with piles of grain left to dry in the sun -- are strongly reminiscent of a rich past.

Today, some of those cobbled courtyards have given way to concrete floors. Slate roofs have been replaced by tin roofs. The clearest view of the extent of damage caused to the ancient structures is from a nearby ridge. One realises that a good part of the damage has been done by what art historians term 'pious vandalism'. Locals and officials, intending to preserve and renovate the old houses are ending up irreparably damaging them.

The village has seven ancient temples. The majestic Mahadev temple, considered one of the finest specimens of wood architecture in the region, was one of the first victims of this form of vandalism. "The beautiful temple was renovated and changed into an ugly structure by a revenue official, who thought he was doing a perfect job of it," says a regular visitor to Nirmand. A new practice of painting the wooden houses is also contributing to the damage. While the traditional polish made with apricot and linseed oil was safe and preserved the wood, chemical paints have toxic effects.

A number of structures have simply been abandoned, and a few are lying in ruins. The fortress-like Parashuram temple is in a dilapidated state. The main idol of the temple's deity was stolen a few years ago. And this is not an isolated instance. A caretaker of one of the many ancient temples in the village says, "Recently, a foreigner was willing to pay over Rs 100,000 for a single wooden panel of a temple covered with traditional wood carving."

A frequent visitor to Nirmand has this tale to narrate, "I took photographs of a wooden sculpture of Ganesha on one of the wooden panels. Later, when I tried to match this picture with a photo and description in a book called Antiquities of Himachal , I noticed that earlier, there was the sculpture of another deity at the same spot. Evidently, the original one had been smuggled out and another sculpture had taken its place."

There are some attempts now to guard what is left of the precious artefacts in the village, some dating back to sixth century ad. There is an interesting story about a copper plate that dates back to about this time. The villagers got together to establish a system to protect it. Eight members of the village panchayat have the key to the place where the copper plate is kept locked. If someone so much as wants to see the plate, all eight members would have to give their consent. Only then can the lock be opened and the copper plate viewed.

It is heartening that at least a section of the village has woken up to the destruction of their heritage. There are a number of voices today that express deep concern and dismay. "In the last 10 years, many of these houses have been demolished, and only a few have been replaced with the traditional wooden structures. Increasingly, the trend is to go for concrete structures," says Paras Ram, who at 98 is the oldest resident of the village.

Paras Ram is not alone. Indian National Trust for Art and Cultural Heritage (intach) has been working towards getting the Indian government to declare Nirmand a heritage village. "This would ensure that no new structures come up in the area demarcated as a heritage site. Repair and restoration work will also be carried out," says B S Malhans, in charge of intach's Shimla chapter. Malhans adds, "Once a village is declared a heritage village, it means funds will be available for its preservation and restoration from several national and international bodies, such as the World Heritage Fund, the ministry of tourism and culture, and also the environment ministry."


V C Ohri, author of several books on art in the western Himalaya says, "The most urgent need is to document the houses and temples of Nirmand. Restoration and preservation work should follow." O C Handa, art historian, says, "The only way to save Nirmand from further damage is to declare it a heritage village immediately. This was done quite successfully in Bharmaur in Chamba district. There is no reason why it should not be successful here."

And there are other examples as well. intach had succeeded in getting Pragpur (Kangra valley) declared the first heritage village three years ago. Similarly, in May 2002, the World Heritage Fund agreed to fund the restoration work of a thousand-year-old abandoned monastery in Nako village in the remote tribal district of Kinnaur, close to the Tibetan border.

Manoj Jerat, an environment writer, has just returned from Nirmand. He believes that no plan to preserve the heritage of the village could be successful without the active co-operation of the villagers. He says, "A sensible way of preserving Nirmand's architecture is by promoting and developing 'heritage tourism'. This would provide an incentive to the villagers to look after these monuments.

The Outer Seraj area surrounding Nirmand is dotted with several scenic spots and old dak bungalows from the Raj days. These could be developed as trekking camps, with Nirmand as the base camp. The added attraction would be an exploration of the ancient hill architecture of the village."

There are no black and white answers to Nirmand's development dilemma. But art historians and art lovers in India are worried that the village's priceless architecture and artefacts are more deeply threatened with every passing day.