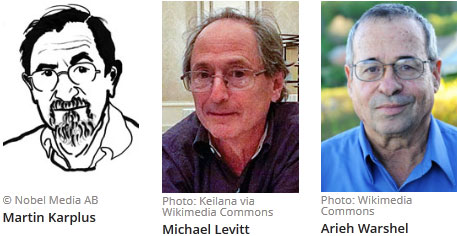 For modelling chemical reactions, the researchers earlier had to choose between models that were based either on classical physics or quantum physics. Classical physics allows modelling of large molecules but does not allow for the simulation of chemical reactions. On the other hand, quantum physics can be used to study reactions but as the process requires enormous computing power, it can be used only on small molecules.

The three researchers married the two and developed models that allowed the use of both simultaneously. For example, in a reaction where a drug couples to its target protein in the body, the computer performs quantum theoretical calculations on those atoms in the target protein that interacts with the drug. The rest of the large protein is simulated using less demanding classical physics.

These models can be used for understanding processes such as a catalyst’s purification of exhaust fumes or photosynthesis in green leaves. The strength of the methods is that they are universal. They can be used to study all kinds of chemistry, from the molecules of life to industrial chemical processes. Scientists can use it to optimise solar cells, catalysts in motor vehicles and even drugs.