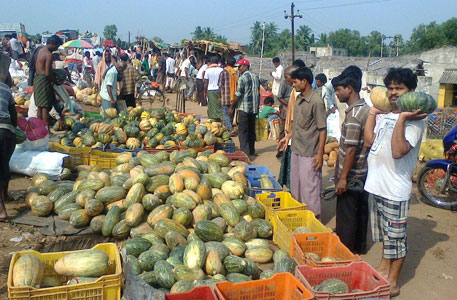 As many as 16 districts in Odisha state have been put on high alert in anticipation of tropical storm Hudhud, which is expected to make a landfall on the Odisha-Andhra Pradesh coast in the early hours of October 12. The move follows the deep depression in the Andaman Sea intensifying into a cyclonic storm on Wednesday, said Pravat Ranjan Mohapatra, deputy special relief commissioner, posted in state capital Bhubaneswar. It may be recalled that last year Odisha coast was hit by cyclone Phailin  on the same date.

The state government has cancelled leaves of its employees and Odisha Disaster Rapid Action Force and fire service personnel have been instructed to be ready to deal with a possible emergency.  News of the imminent cyclone has spread fear in the seaside villages of the coastal districts of Kendrapada, Jagatsinghpur, Puri, Balesore, Bhadrak, Ganjam and Khordha;     fishers have been asked to keep away from the sea. “We have instructed the collectors of all these districts to evacuate the seaside residents to safer places,” added Mohapatra.

All the cyclone shelters in the seaside villages are being readied to accommodate people. People have been alerted through public announcement system, said Narayan Haldar, president of Odisha Traditional Fish workers’ Association.

A large number of residents of seaside villages, including those of  Sandhakuda, Noliashi, Goda, Japa, Dahibar, Ambiki in Jagatsinghpur district, have begun leaving for safety.

These villages had borne the brunt of the super cyclone of October 1999  which claimed 10,000 lives.

"Hudhud could be life-threatening for the seaside residents because of which we have urged them to leave for safer places.  It is too early to predict what the impact of the cyclone will be, there are fears that it could threaten thousands of people in coastal Odisha,” said Mohapatra.

“The coastal areas are regularly hit by major cyclones in the month of October and so everyone is taking this threat extremely seriously and making sure the right measures are in place to mitigate the impact. The government has issued a warning to people against visiting the seaside,” added Mohapatra.

"Many NGOS and other agencies  are working with the government on disaster response and preparedness procedures ahead of a cyclone,” said  Mohapatra.