Fly has an unusual biology which can be manipulated, suggest researchers 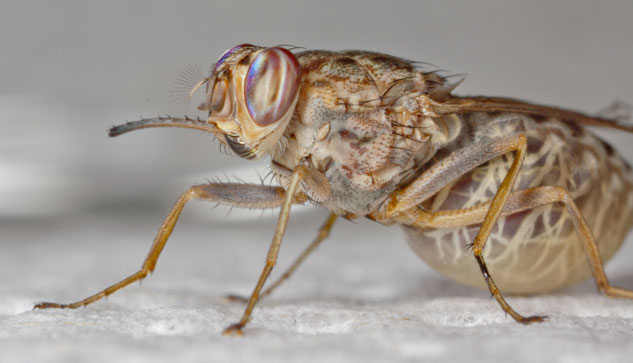 About 70 million people are currently at risk of contracting sleeping sickness in sub-Saharan Africa. This disease is transmitted by the bite of the tsetse fly, which transfers the protozoan parasite, Trypanosoma brucei, to both humans and cattle. The infection results in fever, headache and joint pains, followed by confusion, poor coordination, numbness and disturbed sleep.
In the early 20th century, a sleeping sickness epidemic broke out in east and central Africa. The European colonial powers that controlled this area reacted by sending scientific missions to study the disease. Some groups tried to develop and test new drugs while others believed that the disease could be controlled by evacuating people from the affected areas and taking steps to control the tsetse fly and the parasite. But nothing worked and the disease continued to plague the area.

Now, a team composed of 146 scientists from 78 research institutes across 18 countries, under the umbrella of International Glossina Genome Initiative, has found chinks in the tsetse's armour. The team was working for the past 10 years to decipher the genetic makeup of the tsetse fly, Glossina morsitans morsitans. The 366-megabase genome, obtained from the study, shows that the fly has genetic adaptations which help it spread the disease. This could lead to better treatment and control strategies.

The study provides important understanding of the vectors' vision, olfactory, immune, and reproductive physiology. Among the many genes studied by the researchers is a set of visual and odour proteins that seem to direct the fly's ability to search out hosts and mates. A photoreceptor gene rh5 explains why the fly is attracted to blue and black colours.

The results also showed that the fly has salivary molecules essential for feeding on blood. This includes a family of genes, the tsal genes that are particularly active during feeding. This allows the tsetse fly to counteract the responses from the host to stop blood feeding.

The fly also relies on symbiotic bacteria for nutrients that aren’t supplied by their blood meals. The fly has, in fact, incorporated some of the chromosomes of such symbionts, like the bacterium Wolbachia, over the course of its evolution.

Unlike other insects which procreate through eggs, tsetse fly gives birth to juveniles. Twelve genes were found associated with the tsetse fly milk and these are found to be very similar to those of placental mammals and marsupials. Researchers found that manipulation of these genes could affect the tsetse milk proteins and could be excellent target for tsetse-specific population control approaches. The fly genome revealed fewer sensory and immune response genes compared to relatives like Drosophila. This explains their narrow host ranges.

"Tsetse flies carry a potentially deadly disease and impose an enormous economic burden on countries that can least afford it by forcing farmers to rear less productive but more trypanosome-resistant cattle," says Matthew Berriman from the Wellcome Trust Sanger Institute, who was part of the research. "Our study will accelerate research aimed at exploiting the unusual biology of the tsetse fly."

The project will provide the tsetse research community with a free-to-access resource that will accelerate the development of improved tsetse-control strategies in this neglected area of research. These findings have been published in twelve papers in Science, PLoS Neglected Tropical Diseases, PLoS ONE and PLoS Genetics on April 24.