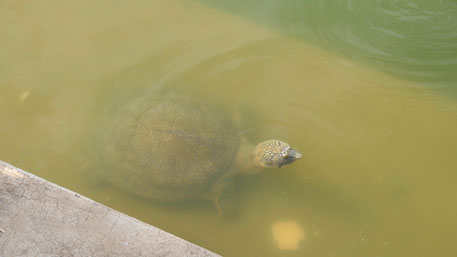 In the past few years, rare Bostami turtles are dying in large numbers in their only know harbour, the Kalyan Sagar Lake in Udaipur town of Tripura. Also known as the Black softshell turtle (Nilssonia nigricans), this indigenous species of the Northeast has been classified as “extinct in the wild” by international conservation organization, IUCN. Analysts say the faulty development design of the lake is pushing the species to extinction.

Spanning 2.5 hectares, the lake is adjacent to the famous Matabari temple of goddess Tripura Sundari. It was built between 1625 AD and 1660 AD by Maharaja Kalian Manikya as a bathing place for the goddess and had since remained a safe harbour for fish and turtles. However, in 1995, the Udaipur administration and the temple development committee concretised its surroundings by constructing a wall of stairs around the lake. “Our intention was to protect the water body from the impact of religious tourism. Every day about hundreds of devotees visit the temple and the lake. Without the wall, the lake used to wash away their refuse and become dirty,” says Madhab Saha, chairperson of the temple development committee. 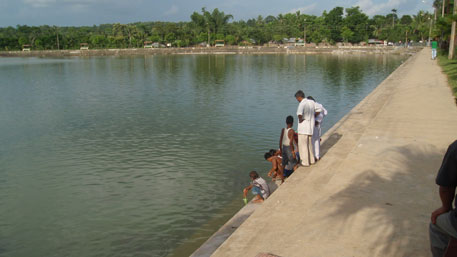 Now, little water-soil interface is left around the lake which is the important for breeding of turtles, says Mihir Dev, chairperson of Tripura State Pollution Control Board. Though there is an opening at one corner for the turtles to come out of water, the space is too small and often remains full of garbage. The turtles also need two to four hours of sunbathing a day to stay healthy. But it is impossible for them to climb up the one-foot-high stairs and is painful to crawl on the concrete stairs on their bellies, the most delicate part of their bodies. “They are often seen struggling to climb the stairs but they fall back into the water body,” says Dulal De, a night guard at the temple for 18 years.

Turtles in the lake also severely suffer from trauma and abscess, says Mrinal Datta, doctor at the animal resource centre near Udaipur. In 2010 he conducted autopsy on turtles found dead in the lake. To understand the reasons for their ill health, Datta tested water quality of the lake. The lake is devoid of planktons, the natural food for aquatic animals. As a result, turtles have to compete with each other to grab the food thrown into the water body by devotees. In this process, they often bite each other, he says. 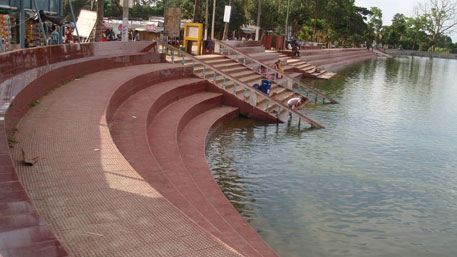 Datta also found that the water had a pH ranging from 5.8 to 6.2, and traces of urea. These conditions trigger and enhance the bacterial reaction in wounds and a wounded turtle dies within six to seven days. Since, the lake does not receive any sewage, He says the puffed rice and biscuits thrown into the water body by devotees could be responsible for urea contamination.
The high density of aquatic life in the lake makes the situation worse. As per a ritual, people leave a fish ling in the lake on special occasions, such as birthdays. As fishing remains forbidden—people here believe that catching fish in the lake can result in death—this leads to overpopulation of aquatic animals in the lake.

In June 2012, scientists of Tripura State Pollution Control Board visited the lake to assess the state of the Kalyan Sagar Lake. They recommended breaking the concrete wall on the north side of the lake or constructing a tunnel to allow turtles come out of water. The board’s recommendation is yet to be followed. Saha says the temple development committee plans to build a hachure for turtles and the board’s recommendations will be implemented along with it. Till then turtles continue to die in the sacred lake.