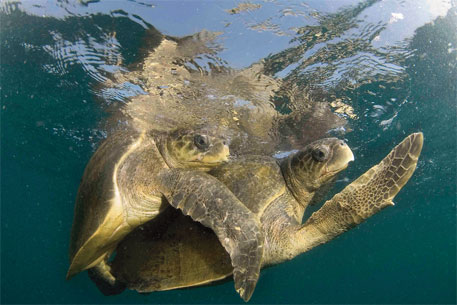 GREEN turtles (Chelonia mydas), though globally endangered, are found in exceptionally high numbers in the coral atolls around Lakshadweep in the Indian Ocean. They congregate here to feed on seagrasses in shallow lagoons. But what is good news for conservationists is considered a nuisance by fishers. Fishing communities in Agatti coral reef around Lakshadweep blame green turtles for a drop in their catch. According to them, green turtles chomp their way through seagrass beds, which are essential for fish to breed. They, thus, kill these turtles and destroy their nests clandestinely, putting the endangered animal at risk.

The perception of people living close to wildlife in such conflict areas shapes the interaction between them and the wildlife. Fishers at Agatti blame green turtles for the falling catch, but is the perception accurate? Rohan Arthur and others from Nature Conservation Foundation, based in Mysore, India, surveyed fisher communities of two places in Lakshadweep: Agatti and Kadmat. Both are atolls, ring-shaped coral reefs with a rim that encircles a lagoon, and are similar in many aspects like size, population, number of fishers, and extent of seagrass meadows. Also, importantly, fish catch had declined in the lagoons of both atolls.

The only difference between the two atolls is number of resident green turtles. Their number around Agatti has increased tremendously since the 1970s, due to effective conservation measures in the area. In 2010, the turtle density in Agatti was 27 turtles per square km of seagrass meadow, which is six to seven times the turtle density in Kadmat. However, people’s perceptions of green turtles in both atolls are remarkably different. In Agatti, almost 90 per cent respondents feel fish catch has decreased over the years because of the presence of turtles, and due to them eating seagrasses. In Kadmat, however, most people blame it on other factors, like overfishing.

Fishers in Agatti say green turtles reduce fish catch by damaging fishing gear. They also propose an “indirect” mechanism: turtles in high numbers eat up a lot of seagrasses, reducing habitat available for the fish. The researchers decided to test this claim. Long term monitoring showed that turtles at high densities do eat seagrass faster than it can grow. In the open sea, 80 per cent of seagrass shoots had turtle graze marks.

Up to 2010, turtles were concentrated around Agatti but by 2011 Kadmat had a very high green turtle density. Kartik Shanker from the Centre for Ecological Sciences, who has worked extensively in Lakshadweep, feels the movement was due to declining food availability. One of the authors, Nachiket Kelkar, says, “We don’t have conclusive proof like satellite tracking to prove that this shift happened. But, the changes in abundance were drastic in just one to two months.”

Since the study period included this transition phase, the researchers could compare density of turtles, health of seagrass canopy and number of fish, before and after the population changes in Agatti and Kadmat. They found seagrass canopy height fell drastically when turtle numbers went up. Also, before the turtle numbers increased in Kadmat, there were 12 times more fish in Kadmat than in Agatti. The numbers support Agatti fishers’ claim: green turtles affect fish catch. Next, researchers tallied how much sea turtle grazing cost fishers. The cost came to as much as Rs 60,000 per fisher per year, says Kelkar.

But direct damage by green turtles is minimal. However, government compensation schemes tend to focus on direct damages, the most “visible manifestations of conflict”, as the authors write in the paper. The fisher’s perception is often dismissed as baseless, thus, forcing them to kill the turtles.

Green turtles have made a miraculous recovery in Lakshadweep. Undoing effective conservation schemes by alienating the people living with them—the most important players in the story, and the most affected—would be unfortunate. To resolve the problem, managers can get fishers to shift to non-seagrass fish species, for as long as turtles are around grazing. They need to realize that fishers have insights that can be right, the authors suggest in the paper to be published in Biological Conservation in November 2013.