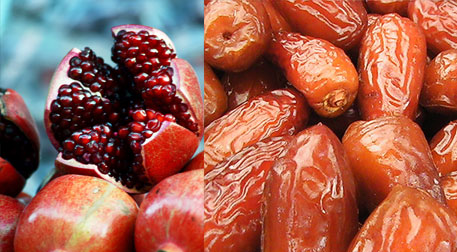 A team of medical researchers in Israel has found that the combination of pomegranate juice and dates provides maximum protection against heart stroke. The fruit and the dry fruit help to prevent atherosclerosis or hardening of the arteries.

“Glorious, red pomegranates and their Middle Eastern sister, luscious toffee-like dates, are delicious, increasingly trendy, and healthy to boot,” says a release by the Technion-Israel Institute of Technology that conducted the study. the-dr-away/ . It was led by Michael Aviram of the Rappaport Faculty of Medicine and Rambam Medical Center.

The team, according to The Telegraph, examined mice with high cholesterol, as well as lab-grown arterial cells, in a trial. Scientists observed that the arterial cholesterol content decreased by 28 per cent after consumption of pomegranate juice and three dates in a day. The findings were recently published in the Food & Function journal of The Royal Society of Chemistry.

What leads to atherosclerosis?
A number of risk factors are involved in the development of atherosclerosis, including cholesterol oxidation, which leads to accumulation of lipids in the arterial wall, adds the release. Natural antioxidants like pomegranate can slow down the oxidation process in the body and serve to reduce the risk of heart attack, dates are rich sources of phenolic radical scavenger antioxidants and inhibit the oxidation of “bad cholesterol”.