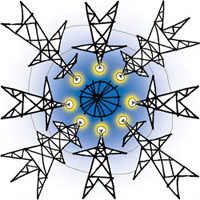 Britain's House of Commons passed the Energy Bill, aimed at attracting investments and reforming the electricity market, with an overwhelming majority on June 4. But the amendment to the Bill for decarbonising the power sector to reduce its carbon intensity was defeated by a small margin, putting a question mark on the country's commitment to a low-carbon future.

According to UK's Department of Energy and Climate Change, the Bill is designed to ensure a steady supply of electricity, reduce emissions and introduce more private sector investment (about £110 billion) in a low-carbon energy mix of renewables, new nuclear, carbon capture and storage and gas. It also plans to keep the country on track to cut all greenhouse gas (GHG) emissions 80 per cent from 1990 levels by 2050 (As declared in their Low Carbon Transition Plan, 2009).

The amendment to the Energy Bill, proposed by the former Tory minister Tim Yeo, was defeated by 290 votes to 267. Under the amendment, generators would have had to use low carbon sources of electricity to reduce to nearly zero their carbon emissions and production by 2030. It featured a target range, requiring emissions of less than 100 grammes of carbon dioxide per kWh of electricity by 2030.

Several potential opponents of the Bill were promised reconsideration of 2030 decarbonisation target in 2016. Secretary of state for energy and climate change, Edward Davey, had earlier said, “We added a clause to enable us to set a decarbonisation target for the power sector in 2016. No political party had this issue in their manifesto, and this will be a world first, an issue that this Coalition Government has addressed head on.” According to Friends of the Earth, an international network of environmental organisations, the amendment was backed by over 200 green businesses, trade unions, charities and faith groups.

After the defeat of the amendment, Yeo alleged the Commons missed an opportunity to provide more clarity for investors on the future direction of energy policy. Ed Milliband, Labour leader, rallied behind Yeo, calling it a huge missed opportunity. Mike Barry, head of sustainable business at Marks & Spencer said that low carbon economy would require long term policy framework which was failed by the defeat of the amendment.

Davey on the other hand, claims that the energy bill passed by the Commons, sends a clear message that the government is providing the security the investors need to “revolutionise the energy sector” and to provide steady supply of power at reasonable rates. He also said that the defeat of the amendment meant that a target would not be set in isolation but in the context of the whole economy’s path towards the 2050 target.

The Energy Bill will now move to the House of Lords. Yeo has been quoted by media saying the the large number of votes in favour of the amendment ought to encourage many peers to support it.