At the UN Climate Summit plenaries most developed countries like the UK and the US displayed commitment through existing domestic policies and international aid, while offering no new contributions 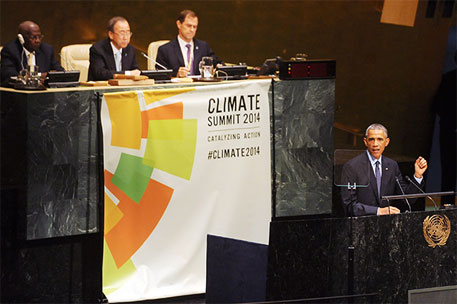 In the months preceding the UN Climate Summit at New York, Secretary General Ban Ki-moon had repeatedly called upon leaders from around the world to attend the summit with “bold actions and announcements”. Earlier this week, prime ministers, presidents and representatives of governments from over 120 countries, both big and small, gathered at the UN headquarters in New York to demonstrate their commitment to fighting climate change. In the plenaries that were organised through the day, global leaders made their statements, demands and outlined their plans.

For some governments, domestic politics, international policies and other factors aligned favourably to enable concrete announcements at the summit, especially financial commitments.  French President Francois Hollande, for instance, offered a $1 billion contribution to the UN Green Climate Fund http://unfccc.int/cooperation_and_support/financial_mechanism/green_climate_fund/items/5869.php. Most other developed countries, such as the United Kingdom, attempted to demonstrate commitment through existing domestic policies and international aid, while offering no new contributions.

“We have the world’s leading financial centre in carbon trading. And we have established the world’s first green investment bank. We’ve invested £1 billion in Carbon Capture and Storage. We are investing in all forms of lower carbon energy including shale gas and nuclear, with the first new nuclear plant coming on stream for a generation. Now, as a result of all that we are doing, we are on track to cut emissions by 80 per cent by 2050,” said British Prime Minister David Cameron.

US President Barack Obama highlighted his administration’s special efforts in the area by stating: “We now harness three times as much electricity from the wind and 10 times as much from the sun as we did when I came into office. Over the past eight years, the United States has reduced its total carbon pollution more than any other nation on Earth.” In addition, he made new policy announcements that integrate America’s large federal aid programmes with sustainable development and climate change.

Why GCF remains under-funded
Many of the national announcements and programmes highlighted during the plenaries at the summit revealed why the Green Climate Fund remained under-funded. With existing financial commitments in structured initiatives, several developed nations seemed hesitant to pledge more. Australia mentioned the $600 million spent between 2010 and 2013 to help countries in the area of climate change adaptation and mitigation, while Canada highlighted the $1.2 billion spent in similar international programmes over the past few years.

Several developed countries touched upon phasing out hydroflurocarbons (HFCs). HFCs were touted as a safer alternative to other ozone-depleting gases several years ago by these very countries and developing countries, including India, were forced to adapt. Over the last few years, there has been resistance from countries like India and China to discuss HFCs outside of the UN Climate Change framework. With countries like the US, Australia and Canada mentioning HFCs at the Climate Summit this year, negotiations on the issue could make headway in the near future.

“Alternatives are available, alternatives that reduce emissions, deliver energy efficiency gains and save money. And if we act now, we can stop many countries ever using damaging HFCs at all,” said Australia’s foreign minister, Julie Bishop.

With their growing appetite for consumption and energy needs, pressure has been mounting on India and China to demonstrate clear vision in the area. Both Prime Minister Narendra Modi and Chinese President Xi Jingping chose to send their representatives to the Climate Summit plenaries rather than make a personal appearance; a move that has been criticised and viewed as a lack of commitment to tackling climate change. During their announcements, representatives of both countries highlighted the need to balance climate change with their respective development goals.

“India remains committed to pursuing a path of sustainable development through eradication of poverty both of income as well as energy. However, it is self-evident that developing countries can do more if finance and technology support and capacity building is ensured. This must be a key focus of international cooperation,” said India’s environment minister, Prakash Javadekar.

Poor nations demand accountability, support
The unique advantage that the UN Climate Summit offers is an equal platform to all countries, irrespective of their global clout. Given the high risk that small island nations around the world face due to climate change, leaders from these countries were vocal in their demands for accountability and support.

Perry G Christie, prime minister of The Bahamas said, “…money is important. Nothing can happen without it. Developed countries must honour their financial commitments from Copenhagen.” “We must look at each country's vulnerability to climate change, its debt and more importantly honor the principle that ‘the polluter pays’,” he added.