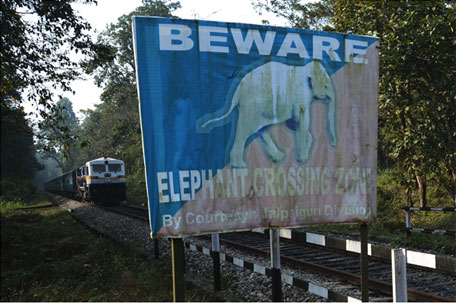 While hearing a petition on elephant deaths on railway tracks, the Supreme Court on Friday snubbed the Solicitor General of India who had appeared on behalf of the Centre. To the Union government’s suggestion that underpasses and overpasses will be constructed at accident prone rail tracks, the apex court asked the counsel, “you want underpasses for trains or for elephants?” When the counsel replied that the underpasses are meant for elephants, the court mocked at the suggestion: “why not put up a road sign as well to inform elephants about these safe passages?”

The Indian Railways might care little about its mascot, Bholu, an adorable jumbo, but going by the Supreme Court order, might soon be forced to mend its ways. Hearing a petition on repeated elephant deaths on rail track passing through forests, the apex court directed the railways on December 10, 2013, to reduce the speed of trains, stop goods trains during night hours and develop alternate routes. On January 21, despite an affidavit from the Indian Railways, the apex court refused to modify its order.

The SC bench of justices K S Radhakrishnan and Vikramjit Sen further instructed the Union Ministry of Environment and Forests (MoEF) and the ministry of railways to examine various suggestions—submitted by West Bengal, Odisha and Karnataka governments—and take steps to prevent elephant deaths on rail tracks. The apex court while hearing the public interest petition filed by Shakti Prasad Nayak in March, 2013, also instructed the ministries to study measures adopted last year by the Karnataka government to minimise elephant deaths on train tracks.

“The Union government argued before the court that it has taken several steps like digging trenches, fencing and is considering underpasses and overpasses. The bench was unconvinced and refused to modify its December 10 order based on the objections raised by the railways,” Sanjeeb Panigrahi, counsel for the petitioner, told Down To Earth.

In an affidavit to the Supreme Court, the railways noted, “Long-term measures like provision of underpasses/overpasses, ramps, grade separators to separate the railway and elephant path... are being discussed for both technical feasibility and fund requirement.” It also submitted supporting research and development for a “wireless animal tracking system which can sense and emit warning signals on approach of heavy bodied animals”. The railways ruled out construction of elevated tracks or an elevated corridor, due to cost implications.

The high mortality track in question is the 168 km line running between Siliguri and Alipurduar in northern West Bengal where 52 elephants have died since 2004. In that year, the track was converted from metre gauge to broad gauge which increased both the speed and frequency of trains. The track passes through protected forest areas—Buxa, Chapramari, Jaldapara and Mahananda—cutting across a prime elephant habitat. 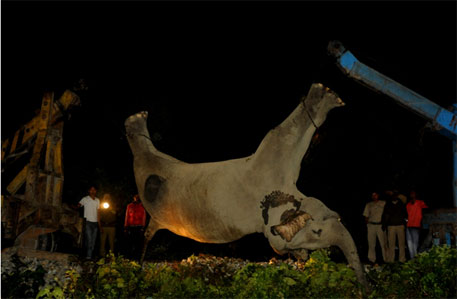 In 2010, after a speeding train mowed down eight elephants in Banarhat on the 168 km track, the railways promised to restrict the speed of trains. But only instructions for “prescribed cautious driving” were issued for stretches with no specified speed limit. Last year, 18 elephants died on the track, proving that railways have failed to take corrective measures.

During the hearing in the Supreme Court, the West Bengal forest department, in December last year, argued that all goods train on the track be stopped during night hours, between 6 pm and 6 am. It also asked for a speed restriction of 25 km/hr and suggested converting the alternate track between New Jalpaiguri and New Alipurduar into a double line so that rail traffic on the killer track could be diverted.

Ironically, the state forest department did not attend any hearings on a similar petition filed by conservationists at the Calcutta High Court in 2013. “We are demanding that all express trains, except passenger ones used by locals, between 5.30 pm and 5.30 am, must immediately stop plying on the track. The state forest department is misleading the Supreme Court by asking for restrictions on only goods trains. In the last two years none of the elephants were killed by goods trains- and since 2004, only 15 of the 52 deaths on tracks were due to goods trains,” said Heerak Nandi, one of the petitioners and member of the International Union for Conservation of Nature's (IUCN) Commission of Ecosystem Management.

“Railways (sic) basic requirement is to serve the humanity at large, across the length and breadth of the nation. The issue of elephant mortality is definitely one of very serious concern and already several steps have been initiated by the Ministry of Railways along with Ministry of Environment and Forest for the mitigation of the problem,” the railways submitted in its affidavit to the apex court. The “steps”—fencing, ramps and underpasses—however, have failed to prevent elephant deaths so far.