Unhealthy surroundings kill more than other factors do

Globally, about 25 per cent of diseases are caused by environmental exposures, causing 13 million deaths yearly

About 33 per cent of the diseases in children under age five are also caused the same way. Preventing environmental risk could save as many as four million children a year, mostly in developing countries

Polluted water, poor sanitation and smoke inhalation resulting from indoor use of wood-burning stoves are the main risks in most poor countries, including India. Poverty is one of the major obstacles in reducing risk exposure here

Unhealthy environment causes nearly one-third of the deaths and diseases in poor regions. It poses health risks in rich countries too.

The study says the 'disability adjusted life years' (dalys) are preventable through healthier environments. daly is a unit that includes years lost when someone dies prematurely, and also takes account of years blighted by chronic disease or disability

Measures to reduce such environmental diseases include promotion of safe household water storage, sanitation, use of cleaner, safer fuels, more judicious use and management of toxic substances in the home and workplace and better water resource management

Source Preventing disease through healthy environments Towards an estimate of the environmental burden of disease, A Pruss Ustun and C Corvlan, WHO 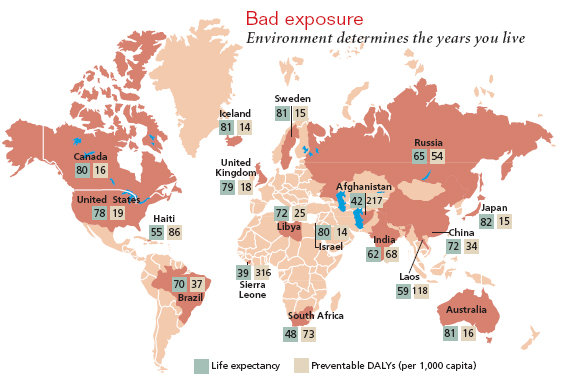