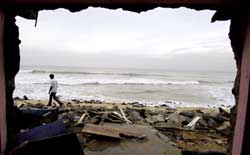 the Tamil Nadu government's effort at coastal regulation in tsunami-affected districts has taken a controversial turn. The government had ordered the relocation of houses within 500 metres of the High Tide Line (htl) and also of those between 500 metres and 1 kilometre (km) if the topography so demanded. But the recently released report of the M S Swaminathan (mss) committee on the 1991 Coastal Regulation Zone (crz) notification (part of the Environment Protection Act, 1985) suggests doing away with the very system of demarcating the htl. It suggests adopting a more distinct natural boundary instead. The report points at loopholes in the crz rules. Another grey area in the government's directive is that beach resorts, hotels and farmhouses have been kept outside its purview. Local fishing communities suspect they are being given incentives to relocate so that their land can be "grabbed" for commercial purposes.

The state government's directive was issued by the Revenue Department's Disaster Management and Mitigation wing. It was addressed to the collectors of 13 districts. They were asked to conduct surveys to identify houses within the 500-metre and between the 500 metre to 1 km zones. But the order made it clear that the first rehabilitation effort will cover only those living in the under 500 metre zone.

What is crucial is that while the order doesn't make shifting mandatory, it makes the prospect appealing. It almost sounds like a favour: "A preliminary discussion with the affected population...will be required to assess whether they would be interested in shifting...In case of relocation, the existing houses will have to be handed over to the government by a process of relinquishment for appropriate action, since the beneficiaries ...will be given full ownership of the area under their enjoyment and the construction will be fully funded." This fuels the suspicion of a hidden agenda behind not making commercial establishments relocate, especially when they also cause considerable pollution. "The current drive will affect the fishing community the most. It is absurd that the government is protecting big resort owners on the plea that they are generating revenue. After all, how do you account for the incomes generated by the fishing community living on the coast?" wonders irrigation economist A Vaidhyanathan.

The mss committee report, submitted on February 5, 2005, brands crz rules as unscientific and badly structured, containing unclear terminologies. It comes down heavily upon the 17 amendments made to the notification in the last 14 years due to pressures of developmental, recreational and housing activities. These amendments diluted the rules and went against their very objective, it says. Regarding htl, it says its definition is confusing. Different agencies interpret the guidelines of the Union ministry of environment and forests (moef), which framed the crz notification, differently. Besides, htl maps are not accessible to the common man.

The report also points out that state governments don't possess the infrastructure to enforce crz rules and take action against violations. The moef had set up committees to examine specific issues every time an amendment to the rules was demanded. But had it actually adhered to the recommendations of these committees, the crz notification wouldn't just have been strengthened but would also have become clearer, the report adds. But this did not happen.

In view of the flaws in the crz rules, the committee suggests guiding principles to govern future decisions on coastal zone management (see box: Stricter and clearer). It also proposes the establishment of a three-tier structure -- a national board for policy guidance on sustainable coastal zone management, a professionally led sustainable coastal zone authority for task implementation and a national institute supported by two island centres to serve as repositories of policies, legal decisions and guidelines.