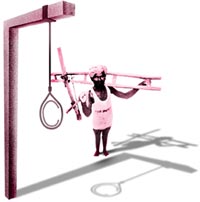 Patents on life forms are unethical, contrary to the principles and cultural norms of various societies, and should be prohibited. This was the crux of the argument advanced by a group of African countries at the trips (Trade-Related Aspects of Intellectual Property Rights) Council meeting in Geneva, Switzerland, from June 4-6. The proposal sought to kick-start a review of Article 27.3 (b) of the trips Agreement, which deals with the subject. At the same forum, India mooted a plan on protecting genetic resources and traditional knowledge systems from misappropriation and 'bad patents'. Viewed against the backdrop of the World Trade Organization's (wto) forthcoming Cancun ministerial conference, such weighty matters take on a meaningful focus.

The review of the section on life forms began in 1999 with little enthusiasm from the North. Predictably, the December 2002 deadline to finalise the re-evaluation of Article 27.3 (b) and suggest "appropriate action" has passed without any progress. Also referred to as the "biotechnology clause", it describes subject matter that countries may keep out of the purview of patents. This includes life forms such as plants and animals, as well as biological processes (like conventional breeding) used for their production. At the same time the section obligates member nations to extend patent protection to microorganisms (bacteria, algae or fungi) along with certain non-biological and microbiological production methods (tissue culture or insertion of genes in a plant).

The African group contends that all life forms -- including microorganisms, and non-biological and microbiological processes -- should be removed from the ambit of patents. The eu has, however, rejected the suggestion. The us is also likely to adopt a similar stance, given that its laws offer patent protection not only to microorganisms but to plant and animal inventions as well. This, it argues, gives the necessary incentive to its biotechnology industry.

Sources in India's Union ministry of commerce and industry aver that the African proposal is impractical and "hits at the very foundation of the biotechnology sector". On the contrary, civil society representatives in the country feel that India must support the African viewpoint. "Disallowing patents on all life forms should be the government's objective. But domestic laws, which permit patenting of microorganisms, will first have to be fine-tuned," points out Suman Sahai, convener of non-governmental organisation Gene Campaign.

The India-led proposal at the trips meeting, though reflecting the developing countries' stand, evoked a mixed reaction from the North. It entails establishing criteria that would require patent applicants to disclose the origin of the biological resource and the associated traditional knowledge being used in an invention. Additionally, evidence of prior informed consent as well as details regarding benefit-sharing arrangements stipulated by the national authority would have to be furnished.

Patents are generally granted for inventions if they are new, involve an innovative step and are capable of industrial application. But there are numerous instances of credit being taken where it is not due. Cases relating to turmeric, neem, bitter gourd, quinoa and ayahuasca amply demonstrate this trend. The need for the precautionary mechanism recommended by India stems from concern over such aberrations.

The us has strongly opposed the inclusion of disclosure requirements in patent applications, arguing that it would be incompatible with the trips pact since it will further impede the application process for patents. For its part, the eu is willing to discuss the issue but is reluctant to make it a formal criterion. Switzerland, on the other hand, prefers an amendment to the World Intellectual Property Organization's Patent Cooperation Treaty necessitating declaration of the source of genetic resources and traditional knowledge in patent applications.

Meanwhile, both the Africa and India-led groups have laid emphasis on a multilateral solution under wto to tackle biopiracy at the global level. In this regard, they highlighted the limitations of national laws and contracts. The African bloc, for example, has called for international regulatory mechanisms within the framework of the trips Agreement -- a move that would require drastic changes. But most developed nations, including Japan, the eu and the us, are averse to any amendments being made to the pact since it is heavily biased towards them (See table: Uneven patents regime). Despite this, developing countries will be hoping to make minor gains in the current round of negotiations by addressing the issue.