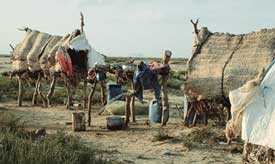 The Economic Coordination Committee of the federal cabinet of Pakistan approved the proposal of the Diamond Bar Island City in October 2006. The project, to be built on the 4,856-hectacre (ha) Buddo and Bundal islands located off the southwestern tip of Karachi coast, is facing stiff resistance because it poses an environmental threat to marine life and the mangroves, besides being a livelihood issue for the fisherfolk.

Emaar, a uae-based firm, will develop the project at a cost of us $43.14 billion. It envisages real estate projects for residential, commercial and leisure purposes, besides industrial parks, free zones and port terminals.
Bundal island is the largest of over 20 islands located along the coastal belt of the Sindh province.The twin islands locally called Dingi and Bhundaar, are bordered by the Korangi, Phitti and Jhari creeks, the fishermen's gateways to the sea. About 500,000 fishermen carry out fishing in the vicinity of these islands. The island also serves as a stopover for the fishermen heading to or returning from the sea. "If the project comes through, small fishermen will lose their passage to the sea. This will restrict the movement of more than 5,000 fishing boats forcing fisherfolk to take a longer route to reach the sea," says Muhammad Ali Shah, president of the Pakistan Fisher Folk Forum.

After the approval of the project on October 11, prime minister Shaukat Aziz asked the minister of ports and shipping to work out comprehensive details within three months to gauge whether it would have any adverse environmental or other hydrological impact but Shah considers this a formality. "The government will conduct a cosmetic assessment study, eventually signalling all green for the project," he says. Shah also feels that the proposed city is being developed essentially for the 'extremely rich'.

The vegetation of the twin islands comprises mangroves, small xerophytic bushes and grass. The islands are in the iucn (world conservation union) list of high-priority areas. The area under mangrove cover in these islands is about 10,000 ha, which is also the habitat for juvenile fish and shrimps. "The mangroves stabilise the island and serve as nurseries for shrimps and fish. Besides, blank areas or mudflats are available for plantation," says Tahir Qureshi, director, Coastal Ecosystem, iucn Pakistan.

The Sindh coastal belt is prone to cyclones where their frequency is considerably high. Destruction of the mangroves along the coast will just heighten the problem. "By handing over the two islands, the Pakistan government is violating international treaties like the Ramsar Convention on wetlands," says Naseer Memon, an environmentalist and provincial coordinator of lead Pakistan, an ngo. The convention on wetlands, signed in Ramsar, Iran, in 1971, is an intergovernmental treaty that provides the framework for national action and international cooperation for the conservation and wise use of wetlands and their resources.

The project also poses a threat to the endangered green turtles that visit the islands for breeding and other migratory birds. Pelicans, flamingoes, cormorants and cranes along with resident species such as herons, waders, terns, egrets and kites will also be affected. "The construction of Port Qasim not far from the islands has destroyed the mangroves and coastal environment already. Developing the proposed city will cause irreparable damage to the ecosystem," says Muhammad Nauman, associate professor at ned University of Engineering and Technology, Karachi.

Although the project is being touted as a development imperative, instances of the lack of it are in plenty in Karachi. "They talk of development. Why does not the government develop Karachi and its battered roads to begin with, rather than impacting the eco-system adversely?" Shah asks.

And that sounds like a fair question given Karachi's state of affairs.