Action framework has time-bound targets on road safety, vehicle emissions and energy efficiency, and accessibility and sustainable infrastructure, which are to be implemented by African countries 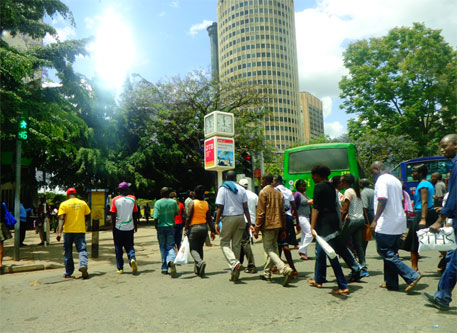 Rapidly urbanising Africa is in the grip of increasing motorisation and its associated problems—pollution, congestion and road traffic fatalities. Recognising the growing problem from fossil-fuel burning vehicles and their impacts on health, as many as 43 countries of the continent have got together to promote sustainable transport. The decision was taken at a two-day expert conference and ministerial meet on sustainable transport held at the UN office in Nairobi last October.

The ministerial meet and expert conference was hosted by Kenya with support from the United Nations Environment Programme (UNEP), World Bank and UN-Habitat in partnership with the Sub-Saharan Africa Transport Policy Programme (SSATP).

The ministerial session, opened by UN Secretary General Ban Ki-moon and Uhuru Kenyatta, the Kenyan president, adopted the Africa Sustainable Transport Forum (ASTF), which sets the roadmap based on harmonisation of priority action areas. The action framework lists 13 actions with time-bound targets on road safety, vehicle emissions and energy efficiency, and accessibility and sustainable infrastructure, which are to be implemented by the African countries. These were circulated by ASTF recently.

The ASTF roadmap adopted by countries will start rolling from this year (see ‘Priority actions and time-bound targets’). The African Union will take ownership of the forum at a political level. Kenya will oversee a hybrid secretariat of the African Union, World Bank and UNEP. The next forum will be scheduled in late 2015 where formal decision on organisational issues will be finalised. There will be continent-wide meeting every two years and sub-regional meetings in the interim.

Over one-third of Africa’s one billion inhabitants currently live in urban areas. This is expected to increase to half by 2030. According to a UN Habitat Report, population of some African countries will increase more rapidly in the next 15 years. In Kenya alone, rapid urbanisation is projected to double Nairobi's car fleet in just six years, a situation that could put the health and well-being of thousands of Kenyans at risk. While per capita CO2 emissions remain low, the rapidly growing consumption of fossil fuels is quickly changing Kenya's CO2 trajectory as demand for energy and mobility expands.

Nduva Muli, principal secretary for transport in Kenya, while speaking at the experts conference, had emphasised on regional connectivity and integration in order to ensure efficiency, effectiveness and environmental sustainability of transport systems. He said there was a need for partnerships to establish implementable, action-oriented priorities.

Air quality is a serious health concern in African cities. Nearly 0.17 million deaths occur every year in Africa due to outdoor air pollution. Vehicular emissions are a major source of air pollution, especially since most countries import second hand vehicles.

Little air quality monitoring data is available in the region, except for a few cities in north and southern Africa. The annual average particulate matter (PM) levels for Accra, Lagos, Dakar, Johannesburg, Tunis, Dar es Salaam and Greater Cairo are far above the WHO guidelines. Studies show air pollution levels in Nairobi are at times seven times higher than the WHO norms. Pollution also doubles near the central business district, indicating high vehicular pollution. Elaine Fletcher of WHO, who was at the experts conference, suggested, “Africa needs to implement air quality monitoring programmes and better understand health impacts of vehicular pollution”.

“Particulate matter including fine particulates, are the most dangerous pollutants, leading to high incidence of cardiovascular diseases. PM in urban areas is primarily contributed by diesel vehicles and toxic diesel emissions have been declared by the WHO as human carcinogens,” Fletcher said.

Transition towards clean fuel and vehicles

Leaded petrol was a major challenge for Africa. In 2002, a partnership for clean fuels and vehicles (PCFV), formed during Johannesburg World Summit on Sustainable Development, identified three priorities: elimination of lead in petrol, reduction of sulphur in diesel and clean vehicles and technology. According to Jane Akumu of UNEP, “When PCFV was formed in 2002, only Sudan in Sub-Saharan Africa was using unleaded petrol. Today, entire Africa, except some parts of Algeria, is using unleaded petrol. Algeria plans to eliminate lead next year. Thereafter, the entire continent will be using unleaded petrol.”

Supply of low sulphur diesel is also a priority. Countries like Ivory Coast, Kenya had very high sulphur levels in diesel—up to 10,000 ppm. East African countries are gradually moving to low sulphur diesel. Morocco, Tunisia and Mauritius have met the 50 ppm target set by PCFV. Five more countries—Kenya, Uganda, Rwanda, Burundi and Tanzania in east Africa will be moving to 50 ppm from January 2015. South Africa and Nigeria are at Euro 2 standards. The former plans to implement 10 ppm fuel by 2017.

African cities urgently need to address the challenge of increasing vehicle numbers and emissions. Around 85 per cent of the registered vehicles in Kenya are imported from Japan. Majority of them are seven to eight years old. If current trends continue, the total number of vehicles is projected to increase to 6 million by 2030 and 9 million by 2050. According to Frederick Nyang of Kenya Regulatory Commission, registration of boda-boda (motorcycles with two-stroke engines) is growing very rapidly and has surpassed other vehicles.  Another concern is decreasing fuel efficiency of vehicles. Initiatives like Cairo old taxis replacement programme under which a new fleet running on CNG have been introduced, and Mauritius’s vehicle excise Act, which promotes energy efficient vehicles taking into consideration CO2 emissions of vehicles, offer lessons for other countries.

Majority of people in African cities walk, cycle or use informal public transport. Over 65 per cent of roads lack sidewalks; where they exist they are poorly maintained. Ninety-five per cent of public transport systems in Africa depend on fragmented, disorganised and irregular informal use of privately-owned 14 to 16 seater matatus. According to Evans Kidero, governor of Nairobi, “only 9 per cent of the city’s population owns cars. While 42 per cent of the people depend on public transport, including matatus, 45 per cent walk to work and other destinations.” Sixty per cent of Kampala’s population walks or cycles, said Jacob Byamukama of Kampala Capital City Authority. Eighty per cent of the motorised trips are accounted for by 14 seater matatus, 10 per cent by boda-bodas and the rest by personal vehicles. The motorised modes are 10 to 15 years old, mostly run on diesel and are polluting. Amanda Aziidah Ngabirano, assistant professor at Makerere University in Uganda suggested at the experts conference, “The vision, policy and planning should include inclusive transport planning policies, integrated land use and transport planning, prioritisation of the majority and more vulnerable, data collection through smart approaches and empower the vulnerable groups.” 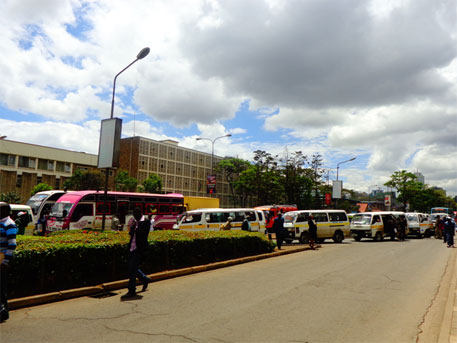 The Kenyan government, in a move to regulate privately owned matatus, has made mandatory cooperatives or sacco formation with minimum 30 members. Fourteen-seater matatus are also being phased out and replaced with high capacity matatus. Creation of a metropolitan transportation authority has been proposed to manage traffic, transport and integrate routes in five counties surrounding Nairobi. A MRTS network for the city along with BRT with NMT integration has also been proposed. 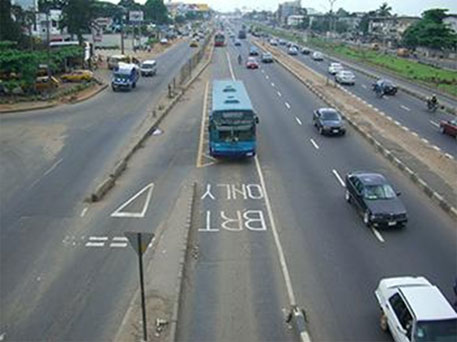 Rea Vaya BRT is the first BRTS in South Africa and links Soweto to the city centre. According to Daisy Dwango, director of planning and policy of Johannesburg Transport department, “a number of affected taxi associations were identified and negotiations were done. The ultimate goal was to ensure that those operating or getting affected by the BRT will be the shareholders in the bus operating companies that will take over the BRT system.”  Similar efforts were made in Lagos as well. According to Taiwo Olukayode, deputy director of Lagos Metropolitan Area Transport Authority, implementation of the Lagos BRT-Lite was preceded by a law to pave way for implementation of the system. “A political champion, the governor, was necessary to see through the BRT implementation. Important elements were the negotiations ensuring that existing public transport operators were integrated into the new system, a proper financial model and integration into the feeder network.”

The African region has only 2 per cent of the world’s vehicles but highest rates of road traffic fatalities. Forty-three per cent road traffic deaths are accounted for by pedestrians and cyclists. According to the World Bank, road deaths are set to increase (by 80 per cent by 2020 in Sub-Saharan Africa if road conditions and traffic safety are not improved.

According to Lucas Munene Gachuru, founder and executive director of Pamoja Road Safety Initiative, a community based NGO in Kenya, the three key areas that affect road safety are: human-traffic conflict and driver culture/behaviour; lack of coordination among institutions working on this issue and an insurance system which is unable to provide adequate and timely support for victims of road accidents, which includes poor hospital facilities. “We do not have required road infrastructure. Designated areas for pedestrians and non-motorised traffic do not exist. Efforts of various departments in Kenya which tried to manage road safety for a long time were disjointed. Creation of national transport and safety authority (NTSA) is a step in the right direction for road safety management.”

In Uganda, Ngabirano added, traffic fatalities are accounted for by 39 per cent of pedestrians and 32 per cent passengers. More than 50 per cent of Kampala’s population are pedestrians and 0.58 million people are vulnerable to road accidents. Uganda is the first country in the region to have a non-motorised transport (NMT) policy. According to Patrik Kayemba of FABIO, an NMT advocacy NGO based in Uganda, the NMT policy requires all new roads to include NMT facilities. Kayemba said civil society has a key role in ensuring that NMT policies are developed, adopted and implemented.

Justin Runji of the World Bank said an African Plan of Action on Road Safety that has been adopted by the ministries of transport in the continent and ratified by heads of states in Rwanda in January 2012. This Action Plan includes guidelines on incorporation of road safety for new and existing roads.