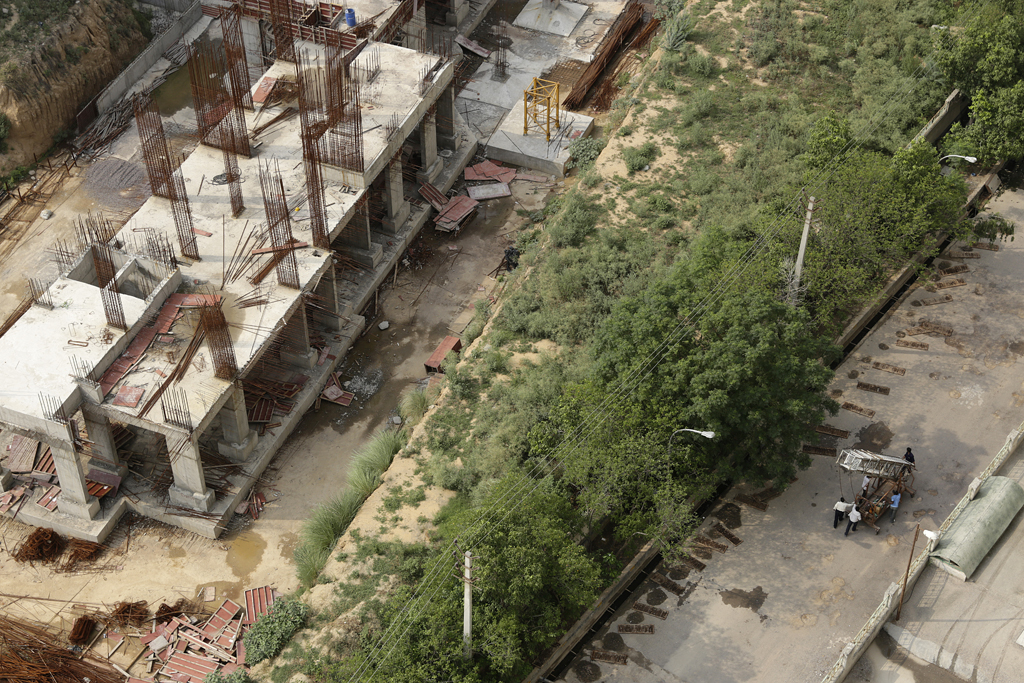 When Delhiites were eagerly waiting for the monsoon this year, more than 1,300 families of Valley View Estate and BSF Cooperative Society near Gual Pahari village on the Gurgaon-Faridabad road were praying for no rain. They feared that encroachment of a stormwater drain adjacent to their homes by a real estate developer would lead to flooding during the rains, as has been happening in the area since 2010.

The stormwater drain, or nullah, is part of a natural drain that originates in the Aravalli hills and is the only outlet for rainwater in the area. But this water channel has been encroached upon by Paras Buildtech India Private Limited to build a residential tower, Paras Quartiers.

Construction started in 2010 and for a year, labourers dumped debris into the nullah, which is 70 metres from the tower. The scale of dumping increased gradually, blocking the drain. This led to waterlogging every time it rained, which in turn resulted in traffic congestion and chaos. The  residents of Valley View Estate in particular faced the heat, as waterlogging flooded the basement of their apartment. In 2011, Paras started construction of another residential tower on the nullah itself. A permanent structure on the drain crushed all hopes of solving the problem of flooding.

During a routine survey in 2012 when construction was in its initial phases, the then municipal commissioner of Gurgaon, Sudhir Rajpal, saw the encroachment and ordered immediate action to clean the nullah, which falls under the jurisdiction of the Municipal Corporation of Gurgaon (MCG). But in the absence of timely monitoring, his orders were not carried out.

For two years, the residents of Valley View made rounds of the municipal commissioner’s office, but their efforts went in vain due to bureaucratic delays and legal loopholes. In September last year, they approached the National Green Tribunal (NGT) as a last resort. Three months later in December, under pressure from NGT, MCG issued a notice to the builder to clear the encroachment area—about 13,000 sq ft—within a week’s time. Paras defied the order and continued with the construction.

In April this year, after measuring the disputed land as per the land revenue records, it came to light that the nullah has been encroached upon by two subsidiaries of Paras Buildtech, Ansal API and two other small businesses. An engineer from MCG, who did not wish to be named, says that MCG had sent notices to all the companies, but they denied such encroachment.

Following the legal dispute, all construction on the nullah has been put on hold. A hearing is on in the municipal commissioner’s office, where the builders are defending their case. "The matter is under consideration and we are waiting for the verdict," says Taran Deep, general manager, marketing and corporate communication, Paras Buildtech.

MCG is not the only authority neglecting stormwater drains. Municipal corporations across the country have a poor record of managing drains. The Ministry of Urban Development’s (MoUD’s) strategy plan for 2011-16 states that many cities in India lack an effective stormwater drainage network, while the existing drains are in a pitiable
condition due to unplanned construction and encroachment.

The funds allocated for management of such drains is insufficient. A 2011 report on urban infrastructure and services, published by an expert committee of the Indian Council for Research on International Economic Relations, states that of the total amount of Rs 3,918,670 crore required for urban infrastructure for 2012-31, a whopping Rs 1,728,941 crore is earmarked for the development of urban roads, while a meagre Rs 191,031 crore has been set aside for the creation and management of stormwater drains.

MoUD’s strategy plan sets the parameters for stormwater management, such as coverage of drainage network and measuring the vulnerability to flooding, to minimise urban floods. Urban floods were recognised as different from riverine floods for the first time in 2010 by the National Disaster Management Authority (NDMA).

"Densification of cities is leading to construction of roads and buildings. This increases impermeable areas that affect catchment and runoff patterns,” says Somnath Sen, professor at the department of architecture and regional planning, Indian Institute of Technology, Kharagpur.

High rainfall in urban areas can thus lead to higher runoff due to constricted stormwater channels. This runoff has the potential to increase the flood volume by up to six times more than a normal flood event, says NDMA.

To accommodate the huge runoff, the National Institute of Disaster Management (NIDM) proposes widening of natural drains. On the contrary, there is large-scale encroachment, says K J Anandha Kumar, associate professor, NIDM. There is also disposal of domestic, commercial and industrial waste and construction debris. These factors are behind urban flooding, Kumar adds.

Following a public interest litigation in 2013, NGT had ordered the Municipal Corporation of Delhi to regularly clean the city’s drains and remove any covers. But actions are not visible on the ground, claim NIDM scientists.

India can learn a lesson or two on stormwater management from countries like Australia and the USA. These countries have developed stormwater retention and detention ponds, pervious pavements and rain gardens to manage floodwater. Equal emphasis is given on the quality of water in stormwater drains for reuse purposes.

According to MoUD, for sustainable stormwater management, stormwater should be considered a potential water source and not a liability. Officials at the Central Groundwater Board agree that stormwater drains need to be protected as they not only control floods but also contribute to groundwater recharge in cities.