As traffic increases on existing lines, accidents due to derailments reach alarming levels in the Indian Railways 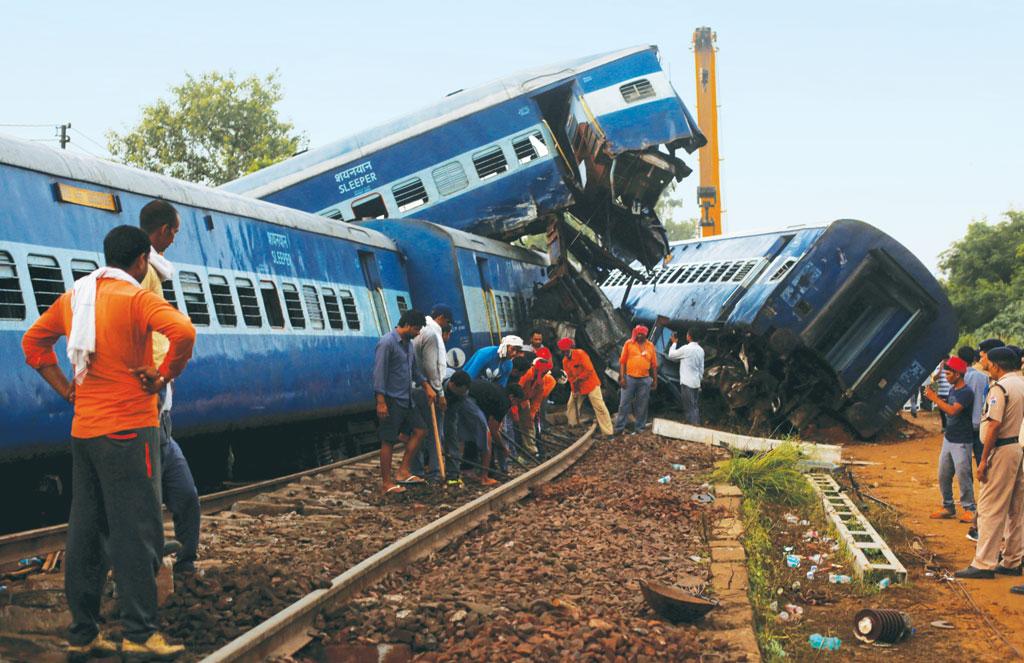 23 people died after 13 coaches of the Haridwar- Kalinga Express got derailed on August 19, 2017, at Khatauli in Uttar Pradesh (Photo: Reuters)

The accidents happened just 11 days after the Mumbai-Nagpur Duronto train derailed in Maharashtra’s Titwala district. Ten days before that, 13 coaches of the Haridwar-Kalinga Express had derailed in Uttar Pradesh.

Train derailments that indicate faults in tracks, besides other things, have always haunted safety in the Indian Railways. What is worrying is that the frequency of derailment is rising (see ‘It’s a risky ride’, p15). The number of derailments in 2014-15 was 63. This went up to 76 in 2016-17, which means close to seven derailments a month or one derailment every four days. In fact, derailments accounted for 77 per cent of all train accidents that year.

So where lies the problem? “Though the traffic of both passengers and freight over the Railways network had increased by 1,344 per cent and 1,642 per cent respectively over the past 64 years, the route kilometres had grown by only 23 per cent,” says the 12th Parliamentary Standing Committee on the Safety and Security in Railways, which submitted its report on December 14, 2016. In 2015, as a result, 40 per cent of the total track sections in the country were operating beyond their “line capacity”, a measure of how many trains a track section can support in a day, says the Railways’ official publication Indian Railways: Lifeline of the Nation.

The increased traffic has also resulted in an unbalanced growth, highlights a 2011 study from IIT Kharagpur. The study, headed by Niloy Gonguly, shows that train traffic has substantially increased in the Indo-Gangetic plain over the past two decades and, as a result, bulk of the train accidents happen in this high-traffic region. “There is a strong relation between the traffic density and track condition. As the density of train increases, the track system is occupied longer and this leads to more wear and tear,” says Ramesh Kumar V G, director, Thales India Pvt Limited, which manufacturers railway signalling equipment. He adds that high traffic also impacts track maintenance and repair work. The Indian Railways has a system of scheduled inspections and patrolling of track. Tracks are inspected daily on foot by a keyman. Also, senior and junior engineers use trollies and fast trains to check tracks at least once in a fortnight. Senior officials should inspect every two-three months. An engineer with the Northern Railways, requesting anonymity, says thorough inspections rarely happen because of “large number of vacancies in keyman and due to unauthorised absenteeism”. Kumar adds that high train density means insufficient time for maintenance.

High traffic has also slowed down the process of replacing old tracks with new. A White Paper on the Indian Railways published in February 2015, states that on an average 4,500 kms of track should ideally be renewed annually. “The progress of track renewals is constantly coming down since the last six years,” says the 2016 Parliamentary Committee report. But less than 3,000 km of old track is being replaced every year. The 12th Parliamentary Standing Committee explains the poor performance by say ing that the ministry has “suffered from chronic and significant under investment as well as low internal generation of resources”. Expenditure on the Railways as percen tage of the transport sector expenditure has reduced from 56 per cent in 7th Five Year Plan to 30 per cent in 11th Plan. Further, the share of the Indian Railways in overall GDP is below 1 per cent.

Human error is another major con cern. Between 2013 and 2016, as many as 165 accidents happened due to the failure of railway staff. A major problem is “signal passing at danger”, which happens when a train jumps a stop signal on its own.

While the Railways has introduced a lot of safety upgradations in the past, a lot more is required. For starters, it has replaced regular tracks (13-26 m) with long rail panels (130 to 260 m) to reduce the number of joints, which are susceptible to breaking. It has also introduced Flash Butt Welding process to connect tracks, which has higher strength than the earlier AluminoThermic method. Another major safety step is the introduction of an Online Track Management System where all the data collected through monitoring and inspections are put for easy access within the Railways.

The Railways can contain derailments even if it embraces indigenous technologies, several of them developed by the Research Designs & Standards Organisation of the Railways (RDSO). The agency, along with experts from IIT Kanpur, had developed several technologies between 2005 and 2009 under the Technology Mission for Railway Safety (TMRS). One of the technologies developed was the Satellite Imaging for Rail Navigation which allows continuous tracking of every train for its location, speed and direction.

The technology is currently fitted in just 43 trains, such as Rajdhani, Shatabdi and Duranto. It should be extended to all trains and the technology can be used for warning trains in case of danger. Similarly, the Anil Kakodar committee, set up in 2012 by the Union Ministry of Railways to review safety standards, suggested that all train coaches be replaced to Linke Hofmann Busch (LHB) coaches as they have special couplers that ensure coaches do not collide with each other in case of derailment. Currently, only a few trains such as Rajdhani use LHB coaches. TMRS has also developed a Derailment Detection Device, the first of its kind in the world, which uses a three-axis sensor that informs the driver if the train crosses a prescribed speed. It also has the ability to apply brakes automatically if the train overspeeds. TMRS has also developed corrosion-prevention rails.

In 2011, the Sam Pitroda committee recommended the implementation of Train Protection and Warning System, under which if a driver tries to jump a stop signal, then the train can stop automatically. It can also be effective against derailment due to overspeeding. There are enough technologies available to contain rail derailments, the challenge remains in the funding and intent. The government took a step in the right direction when it announced the Rs 1 lakh crore Rashtriya Rail Sanraksha Kosh in the 2017 Union budget, but it alone will not be sufficient.