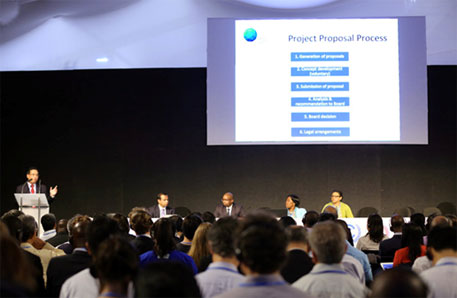 The UNFCCC Standing Committee on Finance, tasked with enhancing transparency and clarity on climate finance flows, released a report titled “The 2014 Biennial Assessment and Overview of Climate Finance Flows”  on December 3 at the Lima summit. This first-of-its-kind assessment report compiled data on the flow of finance for emission reductions and adaptation, within countries and via international support.

UNFCCC Executive Secretary Christiana Figueres said, “Understanding how much is flowing from public and private sources, how much is leveraging further investments and how much is getting to vulnerable countries and communities including for adaptation is not easy, but vital for ensuring we are adequately financing a global transformation.”

The report was prepared with inputs from a range of experts and organisations that collect data on climate finance flows, said an official press release.

Other highlights of the discussions on climate finance

The Green Climate Fund (GCF)’s executive board was “happy to announce” the initial capitalisation of the fund which now stands at US $9.7 billion. The board also announced the internal design of the GCF and finalised the modalities. A fully functional secretariat now assists the board. It will help in mobilisation of funds towards developing nations. GCF will be ready to dispense funds in the first quarter of 2015.

While discussing the “decision-making process of the UNFCCC”, COP President Manuel Pulgar-Vidal proposed to establish a contact group. It was opposed, however, by Saudi Arabia, the EU, India and Iraq. These countries insisted that there was no need for a separate contact group and that informal consultations held earlier would look into the deliberations as well.

In “other matters” discussed at the plenary session, Poland, Mexico and the EU requested the COP president to include education and health in the agenda of items.

CDM has “powerful implications”, it was observed, considering the fact that under this mechanism, 7,800 projects were undertaken in 107 developing countries with $130 billion in investment. These projects enabled a drastic reduction in greenhouse gases.

Concerns were also expressed about the current staggered stage of the CDM. The COP president was urged to renew CDM in light of its potential at mitigating carbon emissions. Zambia, Senegal and the World Bank group called for reforms in CDM to simplify the project cycle and for monitoring of projects. The World Bank group endorsed the setting up of a fast track work programme for drastic transformations of CDM.

Guyana and Palau accepted the Doha Amendment to the Kyoto Protocol which is meant to raise pre-2020 ambition before a new climate agreement comes into force. Currently, only 19 countries have submitted their instruments of acceptance to the Kyoto Protocol. Ratification by 144 countries is required for the second commitment period to come into effect. Countries like Bolivia, Cuba, Saudi Arabia, China, India, Egypt and Iran proposed the formation of a contact group to look into various possibilities of increasing the pre-2020 ambition which is required to cut emissions by developed countries. Developed countries like New Zealand, Australia and the EU, on the other hand, opposed the formation of the contact group. This was ultimately endorsed by the COP President too.