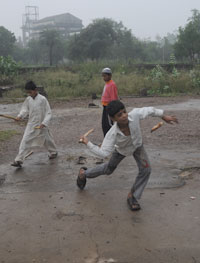 In yet another blow to the survivors of the Bhopal gas disaster, a US district court has dismissed a plea seeking to make Union Carbide liable for contamination caused by its pesticide plant in Bhopal. Seventeen survivors of the 1984 gas leak tragedy had filed a case against the corporation in 1999 in the US district court in Manhattan. On June 26, judge John Keenan ruled that Union Carbide and its former chairperson Warren Anderson are not liable for environmental remediation or pollution-related claims made by residents near the plant.

The plaintiffs had submitted to the court that there is severe groundwater and soil contamination around the plant because of the mishap and the chemicals stored at the abandoned plant site. They alleged that they sustained injuries from exposure to soil and drinking water polluted by hazardous waste in the pesticide plant. The case—Janki Bai Sahu v Union Carbide, 04-cv-08825—in the US Court of Appeals for the Second Circuit (Manhattan) is one among the numerous cases against the corporation being heard in different courts in India and the US.

Series of setbacks for survivors

The lawsuit said Dow Chemicals, which in 2001 bought over Union Carbide Corporation (UCC), should pay for the cleaning of the site and adjoining areas and for the damage to the health and property of the people still living around the factory. It demanded that UCC and its then chairperson Warren Anderson be held responsible for the pollution and contamination caused by the December 1984 gas leak.

UCC, parent company of  Union Carbide India Limited (UCIL) which operated the pesticide plant in Bhopal, filed an application demanding the dismissal of the suit. At the time that the case was last reinstated in the district court in 2008, it was observed by the appeals court that the judge (Keenan) had not given the plaintiffs enough notice to respond to the company’s motion to dismiss.

The latest order delivered by Keenan is the fourth dismissal of this case in the past 13 years. It comes 13 months after final arguments were concluded in May last year. US media reports state that Keenan at the time of dismissing the case observed that when the federal appeals court reinstated the case and sent it back to him, it directed that there be “limited” proceedings about discovery or the exchange of evidence and information between parties prior to trial. “Plaintiffs embarked on a discovery expedition that was worthy of Vasco de Gama,” Keenan wrote in his order, granting the motion to dismiss.

It is also reported that Keenan in the written opinion stated that even when viewing the evidence in the most favourable light for the plaintiffs, UCC is not directly liable, nor liable as an agent of UCIL, nor liable under a veil-piercing analysis. The court concluded: "it is beyond dispute that Union Carbide India Limited (not UCC) generated and disposed of the waste which allegedly polluted the plaintiffs' drinking water."

UCC released a statement after this order which said that after the 1984 disaster, UCIL “obtained permission from the government to conduct clean-up work at the site.” Ten years later, Union Carbide sold its stake in the Indian unit, which later changed its name to Eveready Industries India Ltd. Union Carbide also claims that in 1998 the state of Madhya Pradesh took over the responsibility for the site and remediation efforts. Eveready isn’t involved in the litigation. “The court decision not only dismisses plaintiffs’ claims against UCC, but also clarifies that UCC has no liability related to the plant site and further acknowledges the matter of site ownership and liability as being the responsibility of the state government of Madhya Pradesh,” the company said.

The survivor organisations are currently working on appealing against the dismissal. Rachna Dhingra of non-profit Bhopal Group for Information and Action says each dismissal and reinstatement of the case in the past 13 years has weakened the case. The suit filed in 1999 was under a different title and demanded that Union Carbide pay the gas leak victims. This was dismissed in 2000 and reinstated in 2003, dismissed in 2005 and reinstated again after the survivors appealed to the higher court. The present case had demanded that Dow Chemicals and its subsidiary pay for: a) cleaning of the factory and surrounding areas; b) property damages; and c) health care of all those affected and still suffering the consequences of the exposure to the gas that leaked 28 years ago.

In 2009, the survivor organisations had demanded that the case be transferred from Keenan's court, but that application was dismissed in 2010. It was rejected on the ground that Keenan had been hearing various cases related to Union Carbide and the Bhopal gas leak for a long period.

Dow acquired Union Carbide about 16 years after the accident and 10 years after the Indian Supreme Court approved a US $470 million  settlement paid by Union Carbide and its India unit. Dow Chemicals has consistently shrugged off any responsibility for the 1984 disaster or facing litigation for the same. The survivors' organisations are also fighting against the chemical giant in attempt to remove the corporate veil—numerous companies created in order to disguise the true owners of some enterprises. Dow is one of the big sponsors of the 2012 London Olympics.

On December 3, 1984 methyl isocyanate gas leaked into the streets of Bhopal. It has killed an estimated 22,000 people till date, according to a study commissioned by Amnesty International. The study showed 7,000 perished within days of the gas leak and another 15,000 died later from exposure to the gas. Union Carbide estimated that 3,800 people were killed by the leak.
Web Specials Web Specials Web Specials US Court of Appeals … Union Carbide Corporation Sahu v Union Carbide Rachna Dhingra Methyl isocyanate Judge John Keenan Dow Chemicals Bhopal Group for … Bhopal gas leak Amnesty … 04-cv-08825
SUPPORT US