Global ivory trade leads to slaughter of up to 35,000 elephants a year in Africa, says a non-profit 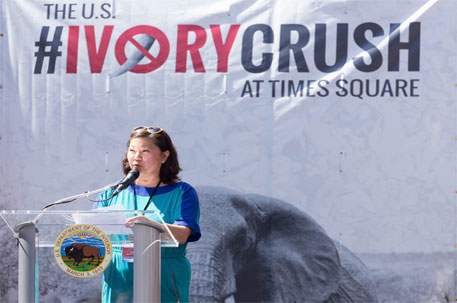 More than a tonne of confiscated ivory was recently crushed in New York's Times Square to send a message that the illegal ivory trade would not be tolerated.

According to media reports, the ivory was displayed on a table and then placed on a conveyor belt before being sent up into a rock crusher to be ground into dust. Much of the ivory was confiscated from Philadelphia antiques dealer Victor Gordon, who was jailed for two and a half years in 2014.

“Today's ivory crush will serve as a stark reminder to the rest of the world that the United States will not tolerate wildlife crimes,” Sally Jewell, secretary of the Department of the Interior, said on the occasion, as quoted by a report in BBC.

Wildlife Conservation Society spokesman John Calvelli added, "This is an illegal product and we feel that burning it or destroying it gets it out of commercial use and, therefore, there's less of a chance for it to find its way into the marketplace."

The non-profit says the global ivory trade leads to the slaughter of up to 35,000 elephants a year in Africa.