Thirty years after they were abandoned for good, nuclear reactors are making a fatal comeback in the US spacecrafts. In 2003, the US National Aeronautics and Space Administration (NASA) was notified about a federal commitment of US $3 billion to develop nuclear-fuelled engines in the next five years. The sum is three times more than what was promised previously. Appallingly, the Bush administration's decision to broaden the nation's nuclear-powered rocket programme, called Project Prometheus, came soon after the 2003 Columbia space shuttle mishap 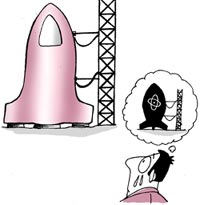 thirty years after they were abandoned for good, nuclear reactors are making a fatal comeback in the us spacecrafts. In 2003, the us National Aeronautics and Space Administration (nasa) was notified about a federal commitment of us $3 billion to develop nuclear-fuelled engines in the next five years. The sum is three times more than what was promised previously. Appallingly, the Bush administration's decision to broaden the nation's nuclear-powered rocket programme, called Project Prometheus, came soon after the 2003 Columbia space shuttle mishap. "Had a nuclear reactor been aboard the Columbia, the result would have been a Chernobyl in the sky. Ironically, such facts are always ignored by the president," assert experts.

The showpiece of nasa's new nuclear adventure is an engine of an unmanned spaceship called the Jupiter Icy Moons Orbiter, which is scheduled to orbit around the three moons of Jupiter after 2011. nasa's nuclear armoury also includes a new generation of radioisotope thermoelectric generators that can be used for interplanetary missions.

The us reposition to nuclear energy has baffled many scientists across the world. "Nuclear rockets are not safe. In the event of an accident/crash, they can prove fatal for life-forms," says G Madhavan Nair, chairperson of Bangalore-based Indian Space Research Organisation. Experts from the us agree. "The technology is completely unnecessary and could have a devastating global impact if there is an accident while the craft is being launched," asserts Bruce Gagnon of the us-based Global Network Against Weapons and Nuclear Power in Space. According to him, nuclear space reactors pose three key hazards: firstly, it will involve the use of plutonium while firing launchers. This may increase the chances of a fatal accident. Secondly, the world will be forced to produce more plutonium; this undoubtedly means contamination of the environs near units manufacturing the radioactive element. Thirdly, the nuclear technology of nasa will inevitably be used by the military. The reactors will end up in the hands of 'star wars technicians', who will use them to power space-based laser systems, which can make the us even more powerful. Plausibly this is the main reason why the us is pushing for nuclear energy, as aiding its military is not possible with the help of conventional spacecrafts.

Typically, chemical rockets are used for launching satellites. Once the spacecraft is in the orbit, solar panels power its day-to-day operations. A few deep space probes use nuclear batteries. These comprise capsules of plutonium wrapped up in lead. The plutonium's radioactivity warms up the lead and the resulting heat is then converted into electricity.

Some politically motivated 'space enthusiasts' argue that such arrangements are unsuitable for interplanetary space cruises because of their limited energy output. Solar-powered instruments, according to them, are of little help in analysing the outer solar system, where the sunlight is dim. Therefore, nuclear rockets aptly fit the bill, they assert.

Perhaps taking cue from these 'space novices', or buckling under political pressure, nasa has prepared the environmental impact report for its Mars Exploration Rover-2003 project. The main findings of the report are as follows: "the overall chance of an accident occurring during each launch is about one in 30 the overall chance of any accident that releases radioactive materials is about one in 230. People in downwind direction could inhale small quantities of radioactive particles."

While making such sweeping statements, nasa has completely ignored the poor track record of nuclear energy for space voyages. Both the us and the erstwhile Soviet Union had extensively used nuclear power in their space exploration ventures during the 1960s and 1970s. The us launched 24 nuclear-fuelled space devices, including a navigational satellite with plutonium aboard. The satellite disintegrated in the atmosphere as it plunged towards the Earth in 1964. Similarly, the former Soviet Union sent more than 30 nuclear-fuelled devices, including the Kosmos 954, which contaminated a vast area of Canada with radioactive debris when it crashed in 1978. In fact, the danger of a nuclear rocket accident had forced nasa to scrap its initial ambitious plans to develop nuclear engines in 1972. However, it seems that the premier space organisation has now decided, or been forced to, desert its wise decision.