US must brace for more lightning strikes in the future 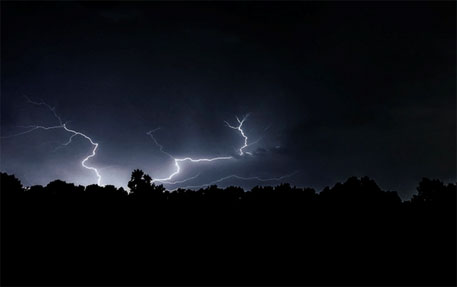 Scientists at the University of California at Berkeley have predicted that lightning strikes would increase in the US by 50 per cent due to global warming.

Scientist David Romps and his colleagues used precipitation predictions and positive buoyancy of air from 11 different climate models to determine what impact warming temperatures would have on lightning strikes. They concluded that their combined effect would generate more frequent electrical discharges to the ground.

They published their results in the journal Science, the latest edition of which was published recently.

In a blog in the Washington Post, Romps was quoted as saying that there were two central factors that set the atmospheric stage for lightning. The first was the amount of water or precipitation, and the second was the instability of the atmosphere, a situation which allowed air to rise rapidly. "To make lightning in a thunderstorm, you need water in all three phases—gas, liquid, solid—and you need fast rising clouds that can keep all of that water suspended in the atmosphere to generate charged separation," Romps said.

So he and his team examined how these two parameters—precipitation and instability, more technically referred to as convective available potential energy or CAPE—changed in climate scenarios, and how that, in turn, would affect lightning.

The blog further quoted Romps explaining that while precipitation might increase in some areas under global warming, CAPE was definitely expected to increase, and this was the central factor that would drive lightning increases.

The study used eleven climate change models—high powered simulations run on supercomputers, which attempted to inscribe the behaviour of the atmosphere in physical equations—to track how future changes in these parameters would increase lightning. The result was a 12 per cent increase in lightning per degree Celsius of global warming, and thus, a 50 per cent increase over the 21st century if current projections of global warming hold.

More lightning would also likely generate more nitrogen oxides in the atmosphere, which exert a strong control on atmospheric chemistry.