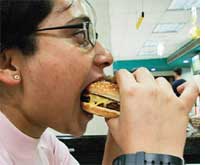 To reign in obesity among children and improving their health, the US government is all set to propose new standards for school snacks. The new rules, if passed, will limit sale of sugar candies, high-calorie drinks and fatty food items. The government has given 60 days to the schools, industry, interest groups and critics of the new proposal to send comments and suggest changes.

Thereafter, the US Department of Agriculture (USDA) will write the final rules. The soonest the rules could be in force would be session of 2014.

The proposal was made public last Friday. The rules, required under a child nutrition law passed by the Congress—Healthy, Hunger-Free Kids Act of 2010—are an effort to combat childhood obesity. The new measures are part of the National School Lunch and School Breakfast programme.

What can be offered to kids

Most snacks sold in schools would have to contain less than 200 calories. The proposal suggests food items like fatty chips, snack cakes, nachos and mozzarella sticks be taken out of lunch menus in school canteens and vending machines. They would be replaced by foods like baked chips, trail mix (a combination of dried fruit, grains, nuts, and sometimes chocolate), diet sodas, lower calorie sports drinks and low-fat hamburgers. The USDA has also recommended providing healthier snack foods consisting of whole grains, low fat dairy, fruits, vegetables or proteins.

As the debate on healthy food for children has been on in the country for years now, some schools have already changed their menu. But many others have not, and the new rules will force them to offer healthy food to students.

The beverage portion size and caffeine content will be controlled according to age group. Elementary and middle schools would have to sell only water, low-fat milk or 100 per cent fruit or vegetable juice. High schools could sell some sports drinks, but the calories would be limited.

The rules will not apply to after-school functions like school games or theater events, goodies brought from home for classroom celebrations, or snacks students bring their own consumption.

Interestingly, many companies that manufacture high-calorie food items, dubbed junk food in common parlance, have worked with the government to draft the proposal. Some have also agreed take most high-calorie sodas out of schools. These same companies, like Coca-Cola Co. & Pepsi-Co Inc., also sell many of the non-soda options, like sports drinks, and have lobbied to keep them in vending machines.