In April, the police had opened fire on villagers peacefully protesting at the dam site 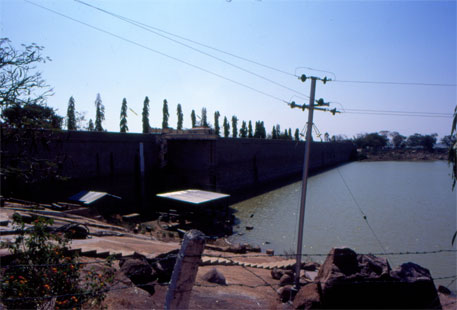 The Uttar Pradesh police on Tuesday arrested the general secretary of All India Union of Forest Working People (AIUFWP), Roma Malik, from Sonebhadra district in Uttar Pradesh for leading a protest against the Kanhar dam project.

Besides Malik, tribal leaders Sokalo and Avijit as well as five other activists were also arrested from their Robertsganj office.

The police said those arrested were charged with inciting the tribal population against the dam project. However, according to the activists, Roma and her supporters were leading an agitation against the state government’s repressive measures in Kanhar valley.

In April, the police had opened fire on villagers peacefully protesting at the Kanhar dam site. The district administration had come under fire for openly shooting at the protestors.

The Kanhar irrigation project is supposed to supply water to the dry regions of Sonebhadra district. According to an estimate, 4,000 hectares will submerge, displacing around 2,278 families once the dam comes up.

“The project will irrigate 35,000 hectares while it will provide clean drinking water to 108 villages in Sonbhadra,” an irrigation department official said.

The project cost has multiplied over a span of 39 years since it was first inaugurated in 1976, government sources said. The cost of the project has escalated from Rs 27 crore in 1980 to Rs 2,253 crore at present. Similarly, the relief and rehabilitation budget has increased from Rs 1.07 crore to Rs 150 crore, irrigation department officials said.

According to the Sonebhadra district administration, out of 1,810 families identified by the district administration as project affected families (PAF), only 550 have accepted compensation from the state government while the rest are the against the project. The identification process is still on, with the PAF numbers increasing from 1,044 families in 1976 to 2,278 families.

Activists fear that the Kanhar dam water will be used to supply water to nearby industrial plants in Sonebhadra, thus depriving farmers of their due share. These units have already polluted parts of the Rihand reservoir that shares its border with the coal-rich Singrauli district.

“The district administration has been allowing illegal mining and encroachment on forestlands belonging to the tribals (who will be) affected by this project. Where will these people go?” Ashok Chaudhary, a member of AIUFWP, questioned.

On December 24, 2014, the National Green Tribunal (NGT) had put a stay on the construction of the Kanhar dam 19 days after construction work was started.

A petition was filed by Debadityo Sinha of Vindhya Bachao Andolan, in which he stated that consent to the project was granted in 1980, much before the present process of Environmental Impact Assessment (EIA) was carried out.

The Uttar Pradesh government, however, did not comply with the stay order imposed by the NGT and Sinha again approached the tribunal in January 2015.

In March, the state government failed to produce the forest clearance certificate. It was only after the NGT extended the date, the government produced the much-needed clearance.

On May 7, 2015, the NGT panel headed by Justice Swatanter Kumar set aside Sinha’s argument and awarded partial relief to the Uttar Pradesh government. Kumar said the project was suffering from cost overrun and needed to start as soon as possible. However, no new construction work was permitted till a committee appointed by the tribunal did not submit a report.

The situation may turn ugly in the coming days as many villagers are not ready to part with their lands and activists are backing them up. The Uttar Pradesh government is keen to finish the project as soon as possible to avoid further cost escalation.