Revival of small river in Fatehpur district shows the way 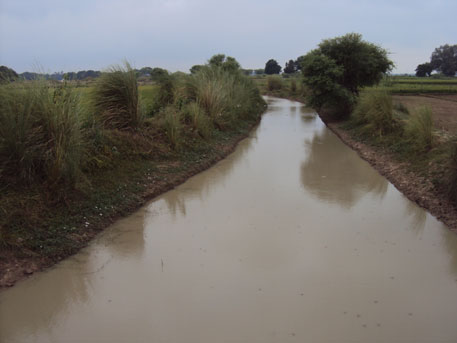 Buoyed by the success of revival of a dry rivulet in Fatehpur district, the Uttar Pradesh government is planning to revive all dried up streams of the state under the Mahatma Gandhi National Rural Employment Guarantee Scheme (MGNREGS).

The Uttar Pradesh government has directed the state's Department of Rural Development to prepare plans for recharging dried tributaries, streams and other water bodies under MGNREGS. The order was issued by agriculture production commissioner Alok Ranjan to the rural development department last month.

Ranjan says a number of districts are facing acute water crisis and that many regions are already in the dark zone or on the verge of becoming one. “The ambitious task of reviving small rivers and water bodies can be achieved only through MGNREGS. The Sasur Khaderi-2 river project of Fatehpur district has proved it and has inspired us,” adds Ranjan.

This year, between February and July, a dried stream named Sasur Khaderi-2, a tributary of the Yamuna river flowing through Teliyani block of Fatehpur district, 150 km south of Lucknow, was revived under MGNREGS. The 46 km-long stream originating in Thithoura lake was encroached over time, resulting in its drying up. Its revival generated 205,000 person days of work and cost around Rs 4 crore.

The revival of the rivulet led to improvement in water table of the region. After many decades, many villagers have grown paddy crop.

More projects like this could help the state improve its performance under MGNREGS. In early October, the apex auditing body, the Comptroller and Auditor General (CAG) had slammed the state government over poor implementation of MGNREGS. In the report, CAG had pointed out that the priority work prescribed as per scheme guidelines were not followed.  It said water conservation and water harvesting should have been given priority instead of road connectivity. But the highest number of work in the state under MGNREGS were to improve rural connectivity.

Ranjan says the state MGNREGS commissioner would be the nodal officer for implementing the scheme to revive water bodies.

The state deputy commissioner of MGNREGS, Ranjan Kumar, says all the district collectors of the state have been directed to chalk out plans for reviving dried water bodies in their districts and start work on it. “The Fatehpur district project has shown us the way,” says Kumar.

The Fatehpur project was successfully commissioned under supervision of then district collector Kanchan Verma.

The present collector of Fatehpur, Abhay Kumar, showed interest in continuing with the initiative. “We are planning to revive other water bodies in the district. We are preparing the plans in consultation with  neighbouring districts as a few rivulets and streams are shared with them,” says the the collector.

The centrally sponsored MGNREGS guarantees 100 days of wage-employment in a financial year to a rural household volunteering for unskilled manual work.

Efficacy of employment generation programs in providing water security: an assessment of MGNREGS in Madhya Pradesh