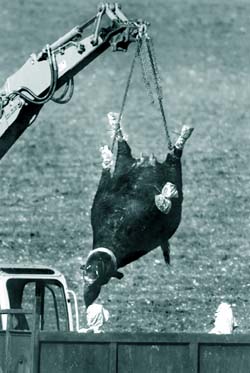 the Indian government and the country's scientific fraternity have reacted sharply to a proposal by two British researchers that the Mad Cow disease could originally have been caused by contaminated cattle feed imported from the Indian subcontinent. "The theory is based on a wild speculation and is not backed by hard data," they argue.

Alan Colchester of Kent Institute of Medicine, Kent University, the uk, and his daughter Nancy Colchester of University of Edinburgh, the uk, say in a controversial paper published in the September 3, 2005, issue of British medical journal Lancet, that in the absence of stringent quality checks, bone collectors, knowingly or unknowingly, would have collected remains of humans who had died of a human variant of mad cow disease, Creutzfeldt-Jakob Disease (cjd), and included them in animal bones exported to the uk. These animal bones were used as feed material in uk's fertiliser and cattle feed industry.

The uk imported hundreds of thousands of tonnes of whole bones, crushed bones and carcass parts containing soft tissue of mammalian origin in 1960s and 1970s, the paper points out; these constituted about 50 per cent of the total bone materials imported by it. But Indian experts call the hypothesis "bit too far-fetched". The Department of Animal Husbandry under the Union ministry of agriculture has also taken a strong exception to the report. In a statement, it said that while trying to answer the questions regarding the origin of Mad Cow disease or Bovine Spongiform Encephalopathy (bse), the West should not try to disown the blame for its improper animal husbandry practices, such as feeding vegetarian animals with carnivorous diet.

bse belongs to a family of progressive, incurable, fatal diseases called Transmissible Spongiform Encephalopathy (tse) caused by a defective protein (called prion) that sets off a chain reaction that destroys nerve cells. The disease is transmitted among mammals when one eats parts of the nervous system of another. While scrapie is another tse afflicting sheep and goats, there are number of similar diseases found in humans: cjd, its new variant called v cjd and Kuru.

The Colchesters' paper seeks to make three changes in the prevailing theories on the origin of Mad Cow disease: firstly, the infection spread from similar diseases afflicting human beings; secondly, the disease took an oral route and, thirdly, the infected material came from human remains which found their way into bone-meal exports to the uk from India, Bangladesh and Pakistan in the 1960s and the 1970s. The controversy has been kicked off by the third inference in particular, as it assumes that the animal bone materials from the subcontinent were contaminated by the remains of humans who died of cjd. T his is an assumption based on the preposterous premise that the poor living on the banks of river Ganga could not have afforded a proper funeral for their dead, and would have thrown the corpses into the river, at least a few of these would be of cjd victims.

Says Susarla Kumar Shankar of Bangalore-based National Institute of Mental Health and Neurosciences' (nimhans') neuropathology division, "The whole hypothesis is built upon a number of conjectures". In a comment in the same Lancent issue, Shankar and his nimhans colleague P Satishchandra point out that the Colchesters have extrapolated that there were at least 150 cjd related deaths in India in the period studied and, of these, 120 may have been Hindus, going by the fact that 80 per cent Indians are Hindus. They also presume that many of these Hindus lived in north India and their dead bodies were thrown in river Ganga. However, in reality, a cjd registry kept by nimhans since 1968 records only 85 cjd cases in the last 37 years. The British scientists counter this with the argument that in developing countries underestimation of diseases is possibility because of limited awareness of diagnostic features, shortage of investigation facilities and a low autopsy rate. But they miss out on a simple fact: most cjd deaths would have occurred in hospitals in different parts of the country and it would be too fanciful to assume that not only were all these dead bodies taken to Varanasi, but that majority of them were thrown into the Ganges while half-burnt, waiting to be picked by bone collectors foraging for animal carcasses. If that had actually happened, these dead bodies would have undergone substantial putrefaction and putrefied human cadaver brains and spinal cord tissues would have led to a major epidemic in north India. Data gathered by nimhans scientists also shows that cjd prevalence in India spread far beyond the banks of river Ganga.


The first Mad Cow case was reported in the uk in 1986. Over 1,80,000 cases of bse have been reported in Europe alone, and has claimed at least 150 humans so far. The liberal export-import regime pursued in the West ensured that the deadly disease spread to most European countries, Canada and the us within a few years of discovery. Countries like Japan and South Korea banned beef imports from the us and eu, creating ripples in international political arena.

The disease has been on the active agenda of western medical and veterinary scientists. But so far, the cause of the original case or subsequent cases has not been established, though several theories are doing the rounds, including transmission from wild animals kept in captivity and transmission from inclusion of bone material from infected goats and sheep in cattle feed. One of the most widely believed theories is that prions responsible for sheep scrapie got incorporated into cattle feed. Scientists argue that ingested scrapie prions radically altered the normal proteins in one cow, which then developed the first bse case. But the Colchesters counter the theory, saying meat and bone meals containing sheep material had been fed to cattle for over 70 years in the uk, exposing cows to scrapie for a long time and, hence, it is hard to explain why bse emerged only recently.


Indian experts feel that scientists ought to proceed cautiously when hypothesising about a disease with such wide geographic, cultural and religious implications. "Scientists should restrain themselves from making such far-fetched claims as they can have unnecessary international trade repercussions," adds Shankar. International experts too find many loopholes in the hypothesis and say proof remains circumstantial. "The argument isn't very compelling because there's no smoking gun evidence," Surachai Supattapone, an expert in infectious diseases at Dartmouth Medical School, New Hampshire, the uk, was quoted by science journal Nature as saying. Hari Shankar, head of epidemiology at the Indian Veterinary Research Institute, Izzatnagar, Uttar Pradesh, points out that so far no case of bse has been recorded in India. Even scrapie was recorded only once, when a sheep got infected in 1961 in the Himalayan foothills. "Probably even this ruminant could be an imported one, considering it was an isolated case," poses Shankar.

A better research track for the Colchesters would have been to characterise the disease-causing protein isolated from the brains of Indian cjd victims and establish homology with the similar protein strain in afflicted British cows, the nimhans scientists argue in their reply in Lancet. Other experts suggest that more information needs to be collected about the number of cjd deaths in the Indian subcontinent, what happened to the bodies, and whether prions could have been transmitted in the way the British scientists propose.

As of now, there is no conclusive proof to show that human cjd prions can trigger bse. In fact, a team of University of California scientists, led by Stanley B Prusiner, who won the 1997 Nobel Prize for Physiology/Medicine for his discovery of prions, said in a paper that appeared in the Journal of Virology in early 2005 that human sporadic cjd prions - the most commonly-found cjd type - did not make experimental mice ill.