Scientists in Madras gave come up with a vaccine that would help leash a viral disease that impairs the egg-laying ability of hens, and is often fatal. 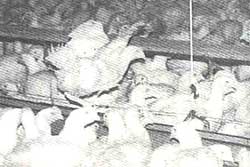 INDIAN veterinarians have developed a vaccine against a viral disease, called Ranikhet disease, which causes haemorrhagic diarrhoea in poultry, especially hens. Though about 10 per cent of the infected hens die, farmers find more worrisome the drop of upto 40 per cent in egg production by the infected birds.

Scientists at the Tamil Nadu University for Veterinary and Animal Sciences (TANUVAS) in Madras cultured the virus obtained from infected hens, in hamster kidney cells. The virus was then killed and used to produce the vaccine. Unlike live vaccines, which are available in the market, this inactivated vaccine does not reduce the birds' egg production.

However, K Nachimuthu, head of TANUVAS' biotechnology department, says the vaccine may be effective only in Tamil Nadu, where the disease takes a heavy toll, because the virulent viral stock was collected from infected hens there.

The new vaccine, at Re 1 a dose, is 10 times more expensive than the live vaccine, but the scientists are trying to reduce the cost to about 60 paise a dose. The vaccine, they say, should be available in the market by 1994.