To help chart afresh course to conserve the Silent Valley National Park, activists who stopped a dam's installation in the region met in the Park at a recent seminar 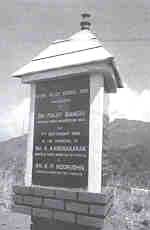 FROM the peak of the Sairandhri hill, south of the Silent Valley in Kerala, the Kunthipuzha river gurgles through the gorge where 17 years ago, a hydroelectric project was designed for installation. For almost a decade, the area was known as the "damsite" even after longwinding public outrage, scientific lobbying and media coverage ensured that no dam would ever come up here.

At Sairandhri, the visitors - trained ecologists, wild life experts and others whose only qualification was that they raised their voices against powerful "development" lobbies - met in a seminar held on November 25, 1995, to discuss the achievements since September 7, 1985, when the Silent Valley was formally declared a National Park.

The present Kerala chief conservator (wildlife), T M Manmohan, was especially remembered to have actively supported the conservationist's struggle for the Valley. Experts V S Vijyan and M Balakrishnan; M K Prasad, U K Gopalan and V K Damodarana of the Kerala Sastra Sahitya Parishad; R K Ramesh, who was secretary of the 'Committee for the Protection of Silent Valley', Justice K Sukumaran; World Wildlife Fund (WWF) reporter Romuluus Whittaker; danseuse Mrinalini Sarabhai; M A Parthasarathy - all who fought to save the Silent Valley, were all there.

The decision to call off the hydel project and to notify the area as a national sanctuary came in April 1984, within weeks of the submission of the report by the M G K Menon Committee. And the Silent Valley became a National Park in November 1984, inaugurated formally in September 1985.

Recent surveys have shown that the Valley shelters 280 medicinal plant species. About 108 orchid species have been recorded, spread across 49 genera. Recently, a ground orchid, Ipsea malabarica was rediscovered after almost a century.

George Mathew and U K Rahmathulla, KFRI, have documented the Valley's butterflies and moths during 1993-95. Their findings show that the Valley is home to about 100 butterfly and 318 moth species, including the rarer ones. This, according to Kerala's best known amateur butterfly photographer, Suresh Elamon, is possibly the only place one finds all three Crow butterfly species - Common, Double Banded and Brown King.

There are 27 unique bird species within the Valley, according to ornithologist Ramakrishnan Palat. The rare avian species are Ceylon Grogmouth, Black and Orange Flycatcher and Nilgiri Wood Pigeon.

Around Sairandhri, a 205 ha area has been demarcated as a conservation area for medicinal plants. About 20 ongoing research projects focus on topics like fish diversity survey; breeding biology of the king cobra; floral ecosystem; population dynamics of the lion-tailed macaque and the Nilgiri langur, and conservation of small carnivores.

The seminar recommended demarcating a buffer zone around the Park since already around the tribal hamlets of the nearly Attapadi hills, a dwindling tree cover testifies to the growing population pressure.